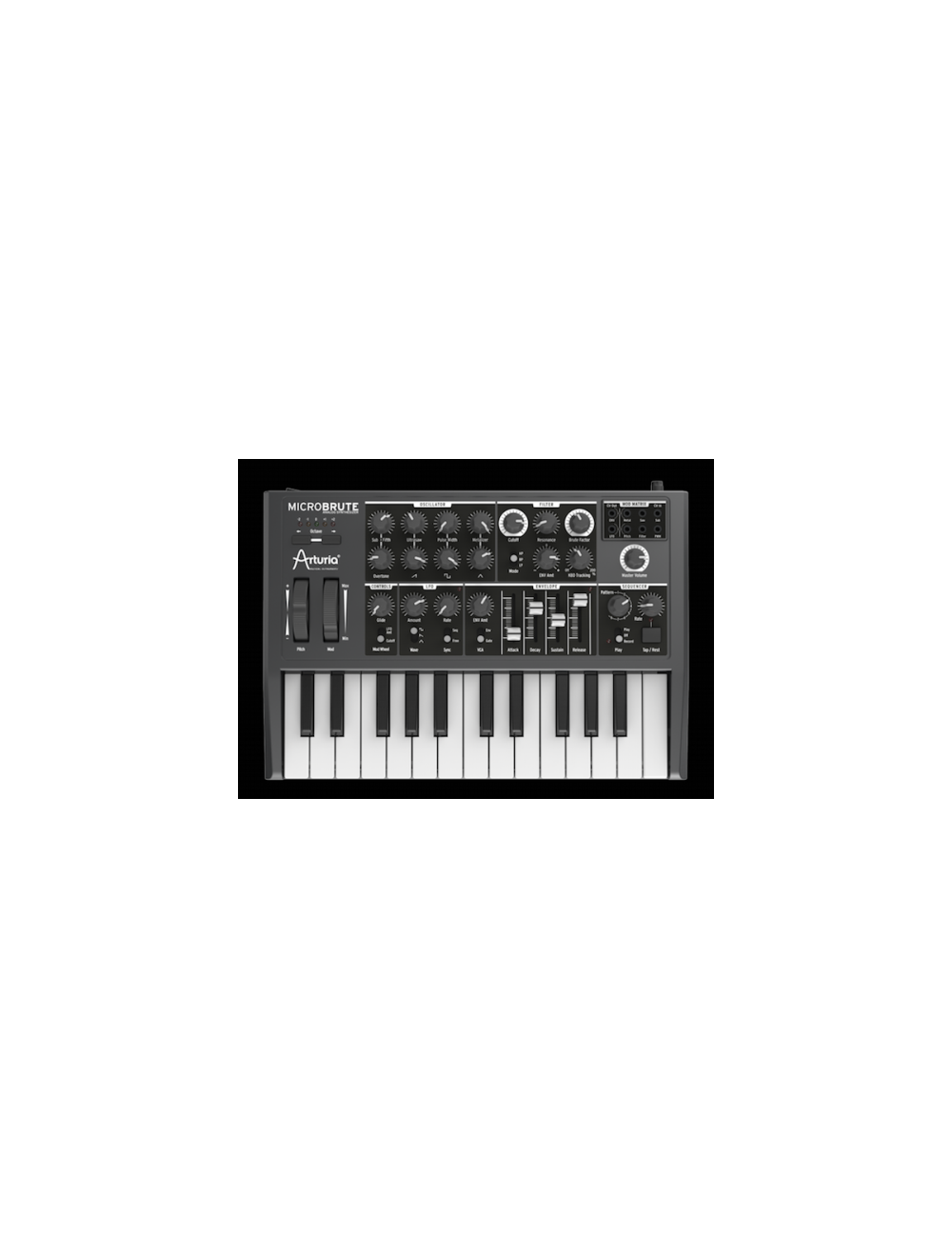 OPEN BOX PRODUCT: The box has been opened before, for a demo or for customer request. The item is in new condition, but the packaging is not factory sealed!

MicroBrute is pure analog sonic powerhouse of a synth. Small in size but loaded with features, it follows in the footsteps laid by its big brother the MiniBrute.

Packed with mixable waveforms, a new sub oscillator design, the famous Steiner-Parker multimode filter, super fast envelope, syncable LFO and the new step sequencer, not to mention the patchable mod matrix the MicroBrute is a landmark new synth at an incredible price.

8 sequences stored on power down

The MicroBrute is new but carries the award-winning heritage of its big brother, the MiniBrute.

The MicroBrute was designed to be small but still retain an amazing sound quality. With a 100% pure analog voice path and advanced interconnectablity via MIDI, USB, CV/GATE, this machine is a true powerhouse synthesizer that takes your sound to a new level.

A synthesizer is a musical instrument that is meant to be played. However, playing a synthesizer is more than just playing some notes on a keyboard and recalling someone else’s presets. If that was the goal you could be looking at accordions or going to a department store to buy your keyboard (along with socks, milk and toilet paper)…but you aren’t because you are more creative than that.

No presets, no menus, nothing to get between you and the ability to sculpt your sound live. Not only does MicroBrute give you the means to create, perform and be completely original every time you power up, it does so with astounding sound quality.

The VCO on the MicroBrute is unique in the synthesizer world. It features the ability to mix waveforms in variable amounts as opposed to simple ON/OFF switches that are found on many synths at four times the price. The sound possibilities don’t stop there. Each waveform has wave modifiers that allow even further tonal variations. While many synths need two or three oscillators to get a somewhat big sound, the MicroBrute is able to achieve a much wider tonal range with its one oscillator.

For the MicroBrute we redesigned our sub-oscillator from the ground up. The new OVERTONE sub allows for the typical -1 octave square wave that thickens up the bottom end but goes beyond this with the Overtone control. The Overtone control allows you to bring in more complex harmonics that when turned all the way up result in the oscillator changing pitch to a 5th above the root. This allows for some classic sounding leads and fatter basses. This control can even be modulated with the ENVELOPE or LFO via the mod matrix which creates some amazing new sounds never heard from a synth oscillator before.

The Ultrasaw builds two phase-shifted copies of the basic sawtooth signal. This effect, when turned up, gives you a slight thickening of the sound as it duplicates the sound of two saw oscillators close to the same pitch.

You can then use the MOD MATRIX to route the LFO to the SAW which will add a third saw sound and allow to simulate a wider detuning effect. This one saw wave can now sound like a three oscillator synth by itself.

The Metalizer takes the basic triangular waveform and “warps/folds” it to create very complex jagged waveforms that are rich in high harmonics. This results in a hard sync sweep type of sound that is perfect for hardcore bass sounds or tearing leads. The ENVELOPE has a default routing to this parameter via the MOD MATRIX. Just turn up the ENVELOPE amount control, adjust your envelope to an interesting setting and you will hear the effect take hold.

The MicroBrute comes with a full featured LFO and a standard ADSR type Envelope. The routing of these modulation sources are configured in the MOD MATRIX. No other synth in this price range allows for this kind of flexibility.

The MOD MATRIX allows you to control many aspects of the voice for different internal sources as well as opening the door to controlling them by external synths and modules.

This allows you the typical LFO/MODWHEEL vibrato control as well as having the envelope add modulation to the Metalizer.

NOTE that the ENV is always routed to the filter and there is a separate ENV AMOUNT control in the filter itself.

This default routing can be overridden by simply inserting one of the patch cords into either the mod output or input jacks. You can then patch in your own routings.

The multiwaveform LFO has Square, Saw and Sine waveforms. It also has an output amount control allowing you to tailor the depth of LFO modulation. LFO range stretches from 0,1 Hz to 200 Hz allowing you to go anywhere from very slow longterm modulations to wild audio range effects.

A standard ADSR (Attack, Decay, Sustain, Release) envelope can be used for controlling the filter cutoff and the amplitude directly. You can then patch the output via the mod matrix and use the AMOUNT control to effect the pitch, Metalizer, pulse width or any other control destination in the MOD MATRIX.

The mod wheel allows for manual control of either the filter cutoff or the LFO amount. This allows you to play the modulation in real-time adding character and interest to your musical passage.

Introduced for the first time in the Synthacon synthesizer, back in the 70’s, this marvellous filter not only gives you a Lowpass mode like most other synths, but also Bandpass, and High-pass, making it a highly versatile and praised boutique filter.

The MicroBrute filter is based on the core of the legendary Steiner-Parker multimode filter and has been improved to deliver an even wider range of cutoff and resonance. Nyle Steiner himself has validated and approved these improvements.

Many synths at well over twice the price of MicroBrute come with only a single low pass filter and many modular synth companies sell their version of this classic filter for more than the total price of the MicroBrute.

The Brute Factor™ was inspired by a patch made on a famous vintage synthesizer. User would connect the headphone output to the external audio input resulting in a kind of feedback loop that is ideal for raspy and grungy sounds. This patch has been adapted and implemented internally first in the MiniBrute and now in the MicroBrute.

With low Brute Factor™ settings, you will hear a gradual depth and roundness to the bottom end. When turned up above about 65% however, the MicroBrute can go berserk and produce barely controllable, crazy feedback sounds.

Note: the Brute Factor™ feature alters the filter characteristics, so expect highly unpredictable results at extreme settings. You have been warned!

MICROBRUTE AS AN AUDIO PROCESSOR ?

MicroBrute is more than a synthesizer. It allows a return to audio experimentation by giving you the ability to process external sounds though it. The MicroBrute has an audio input with a pop-up trim pot for level controls on the rear panel. This will allow you to process any other sounds like voice, guitar or other synths through the MicroBrute’s filter, Brute Factor™, and final output stages.

The step sequencer allows for eight different sequences. These sequences can have up to 64 steps each and are stored in internal memory so that when you power down, they are retained.

You input the notes that you want one at a time and can insert rests using the TAP TEMPO button to create rhythmic patterns. Once you have your sequences, you can choose between many different ways to trigger and play your sequences.

NOTE On or continuous play modes allow you to choose whether the sequence will only play when a key is pressed or to start immediately when the control switch is moved to PLAY.

When you change sequences while playing there are options to choose an immediate change to the new sequence or to have it play the current one to the end before changing.

There are even more controls that are accessible via the free editor software that allow you to tailor the sequencer to your particular likes.

So now you have your eight sequences but you want to make more AND you don’t want to lose your current ones ? Simple. Using the editor software you can import and export your sequences to your computer for archiving.

WHY DID YOU LEAVE OFF BATTERIES ?

When you see the small size of the MicroBrute it is natural to say “They should have made it use batteries ; I can’t believe they didn’t think of this”.

Well, we did think of this but decided to leave this option out for really good reasons.

Sound quality was key. Using high current parts with larger voltage rails to get real sound means that more power is required. This is why so many battery powered synths sound like toys and not like speaker destroying monsters of sound.

After looking at battery options and realizing that most people have accessible power, want to protect the environment and don’t want a small synth that weighs 20 pounds, we decided that it was not worth the sacrifices needed to have it battery powered.