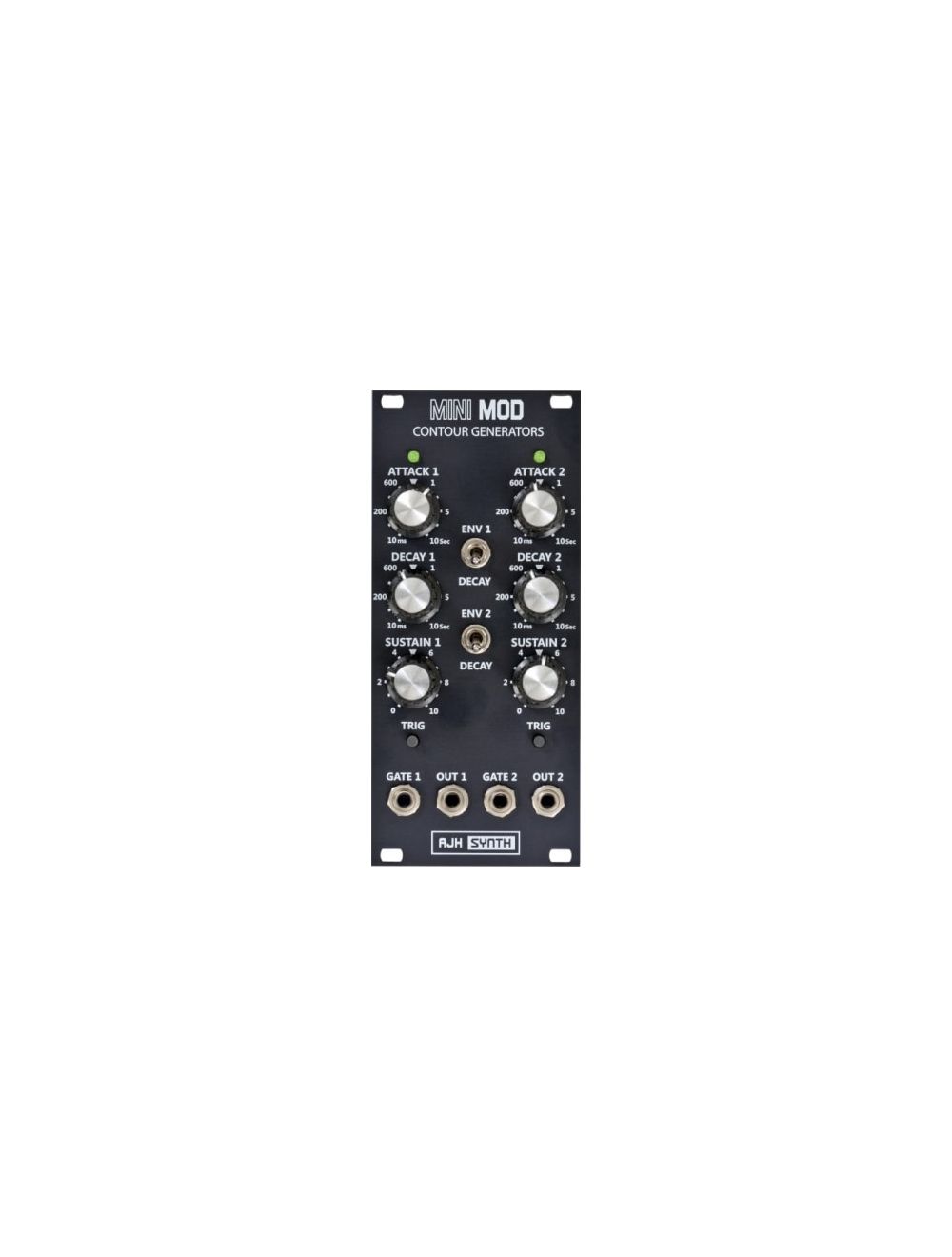 Be the first to review this product
AJH MinMod - Dual Contour Generators - A eurorack delicacy for the the keyboard players - the original envelopes with the same tricks and character.
€243.60 €203.00
Availability: Out of stock
SKU
ajhdcg
Add to Wish List Add to Compare
Details

AJH MinMod - Dual Contour Generators - A eurorack delicacy for the the keyboard players - the original envelopes with the same tricks and character.

Two independant Contour Envelope Generators in a single 12hp wide Eurorack module. These are very accurate replicas of the Model D contour generators, with identical circuitry and component values running on the correct +9.3V and -10v supply voltages of the original; so they exactly replicate the original envelope response along with all of it eccentricities. Extra features include manual trigger buttons and envelope status LED’s

The contour generators played a larger part in the sound of the Model D than many people realise. There are two factors that make them unique, firstly the exponential slope when is used in conjunction with the (near) linear slope of the original VCA which is responsible for the famous Model D “punch”. Secondly, the re-trigger behaviour is quite unique, multiple retriggering increases the output level so that either the volume increases incrementally or the filter opens incrementally with each extra key press.

The manufacturers have added independant Decay switches for each individual Contour Generator rather than the shared switch on the original synthesiser, these switches change the Contour response from AD (switch up) to ADSD mode (switch down).

Several design compromises were made on the original Model D Contour generators to keep complexity, component count and costs lower. These compromises actually made a considerable contribution towards the signature sound of this synthesiser.

Here are the features of the MiniMod Dual Contour generator in more detail:

The discrete transistor circuitry used has a rather unusual response when retriggered. This is probably best explained by looking at the retriggering behaviour of a regular ADSR envelope generator (fig 1) and comparing it with the Model D contour generator (fig 2).

t can be seen that if a key is repeatedly pressed on the Model D before the A/D cycle has completed then the decay is not fully reset and the level of the following attack peak is higher than the previous one. The effect of this is that if applied to VCA each retrigger will be louder than the previous one, or if applied to a low pass VCF the filter will “open” more with each retrigger or key press. Obviously after three or four rapid key presses the maximum level will be reached and subsequent key presses will be at this maximum level. This effect is variable and depends on the Attack and Decay pot settings.

In the original Model D the maximum sustain level on both contour generators is limited to around 80% of the full sustain level, and it has been suggested that this was due to an incorrectly calculated resistor value. This partly contributed to the “punch” of the Model D sound, as even with the sustain control at maximum level there was still an attack / decay transient present. Some Model D’s were modified to correct this behaviour, and the manufacturers have corrected this “fault” on both MiniMod contour generators. But hey, don’t panic! It is easily replicated by setting the Sustain knob to 8.5 instead of 10. They’ve just given you a choice, 8.5 = Original behaviour and 10= full sustain.

Both contour generators share the same exponential response curves, which in combination with the (almost) linear response of the VCA combine to create the epic, punchy bass lines that the Model D is so famous for.

The Gate input will activate envelope generation with a positive going pulse between 2V and 12V and it is protected against negative going voltages, so any Eurorack Modular signal sources or control voltages can safely be connected to it. A 16 way Eurorack power connector is used, and by default both envelope generators will react to trigger pulses on the distribution bus, but this is easily overridden by plugging a patch lead into the Gate input. The manufacturers have included a manual trigger button for each contour generator so that the gate can be manually activated; this is independent from the Gate input pulse and can safely be used at the same time.

The Decay switches change the response of the Contour generator from AD (Attack, Decay) to ADSD(Attack, Decay, Sustain, Decay)individually for each Contour generator. So, when in AD mode the sustain control is deactivated, therefore holding the gate high or holding down a key on a keyboard has no effect after the initial trigger, the decay curve commences on completion of the attack curve; whereas in ADSD mode the sustain control sets the level of the output until the key is released, after which the decay curve comes into play.

The model D runs internally at lower internal control voltages than the Eurorack standard, so the manufacturers have increased the output to bring it into the (rather loose!) Eurorack standard of 0-8 Volts, however it can go as high as 10.5v when using multiple retriggering, so they have added an onboard jumper which reduces the output voltage by 30% to allow for this phenomenon in the rare cases where this may cause a problem.

On the Model D this wasn’t as large a problem as one would expect, as the envelopes act in the same way as ADSR (Attack, Decay, Sustain, Release) envelopes, but with the limitation that the Decay and Release slopes will always be identical, so they are effectively an ADSD (Attack, Decay, Sustain, Decay)rather than ADSR envelope response, as illustrated below. The manufacturers have included the ability to switch rapidly from ADSD to AD mode with the decay switch, this was used as a musical effect by some famous Model D users and this effect usually isn’t possible with a regular ADSR module.