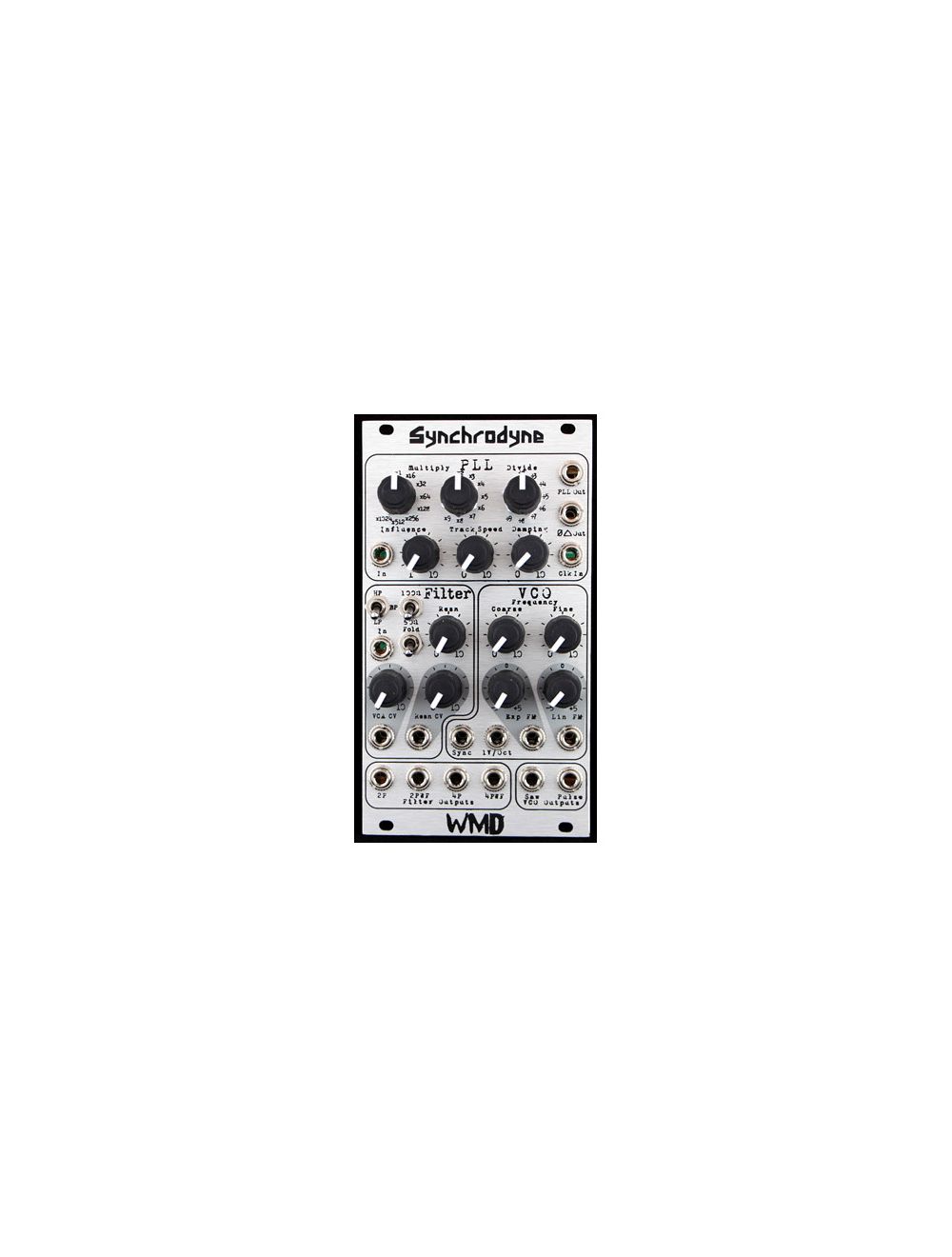 Be the first to review this product
The WMD - Synchrodyne can be easily named as one of the most complex sound-generators out there. A filter, an oscillator and another generator locked to its phase (PLL aka phase locked loop) provides you with plenty of complex edgy and flanging oscillations based on the interactions of the three main units.
€469.20
Availability: In stock
SKU
wsy
Add to Wish List Add to Compare
WMD - Synchrodyne is available to buy in increments of 1
Details

The WMD - Synchrodyne can be easily named as one of the most complex sound-generators out there. A filter, an oscillator and another generator locked to its phase (PLL aka phase locked loop) provides you with plenty of complex edgy and flanging oscillations based on the interactions of the three main units.

Introducing the WMD Synchrodyne, a multi part and multi use eurorack module for the creation and manipulation of audio. Containing several pieces to a traditional synthesizer voice, the Synchrodyne is a powerful addition to any subtractive oriented system. However, it is designed primarily as an experimental sound source/filter, intended to push the limits of modular synthesis...WMD style.

The Synchrodyne is designed as a way to implement a switched capacitor filter (SCF) chip without the use of a microcontroller to run the clock. We developed a fast analog VCO that can drive the SCF with a broad range of frequency control. The problem with this would be that the VCO is then dedicated to only running the filter. So we designed a frequency multiplier based around a Phase Locked Loop IC (PLL) to take the VCO and multiply its frequency up so that the VCO could be used as an audio source, while still controlling the filter. The SCF has a frequency ratio of 50:1 or 100:1 clock frequency to output cutoff frequency. The PLL allows for many ratios of input to output frequencies to be selected, making the VCO a simultaneous audio and control source.

The PLL introduced its own challenges. Taming the PLL to stabilize at high multiplication ratios required us to develop a damping circuit. The Damping and Track Speed controls cause the PLL to have its own sound, sort of a slew limiter and self Frequency Modulation. We wanted the Synchrodyne to distort nicely with audio input, and also to self-oscillate. We added single stage rectifiers to the -12dB and -24dB filter outputs for a more aggressive sound. We opted to develop a VCA and wavefolder for the front end of the filter to further expand the palate of distortion and processing of the Synchrodyne. We had more features to add, but space was limited and we didn't want to make an excessively expensive module, so we added two 14pin expansion headers for future development.