Be the first to review this product
The WMD - Multimode Envelope Expansion is an expansion to the precise, digitally-controlled envelope that is based on the ADSR envelope, one of the oldest concepts in analog synthesizers. However, WMD added more mdoes, more control and more punctuality to it.
€93.60
Availability: Out of stock
SKU
wmee
Add to Wish List Add to Compare
Details

The WMD - Multimode Envelope Expansion is an expansion to the precise, digitally-controlled envelope that is based on the ADSR envelope, one of the oldest concepts in analog synthesizers. However, WMD added more mdoes, more control and more punctuality to it.

WMD - Multimode Envelope Expansion is a nice module expands the WMD Multimode Envelope by handy features like voltage control of the separate envelope segments, "End-of" pulse outputs plus retirgger and hold functions. Functions that will expand the Multimode Envelope: Voltage control of Attack-, Decay- and Release times and the sustain level. the CV inputs ahev bipolar attenuators. In full clockwise position one volt at the CV input will double the rate of the segment. End-Of-Attack, End-Of-Decay, End-Of-Sustain and End-Of-Release outputs give a pulse signal after finishing the according segment. Retrigger input: sets a fired envelope back to zero and retriggers it. any signal at the hold input will pause or freeze the envelope. ADR-Timescale: CV input for simultaneous control of the Attack-, Decay- and Release parameter. This input tracks 1V/octave over approximately 2 octaves. The Reset-On-Gate switch determines it the Multimoe Envelope will be reset when receiving a gate as long as its output it above 0V Four LEDs show intesity of each envelope segment. The expansion module needs to be connected to the Multimode Envelope with a 20-pin ribbon cable. inputs and outputs CV inputs for Attack, Decay, Sustain, Release and "ADR TimeScale". Retrigger input and hold input. Pulse outputs for End-Of-Attack, End-Of-Decay, End-Of-Sustain and End-Of-Release. measures and weight 3U Eurorack module, 6HP wide Current draw of Multimode Envelope and Expander together: +12V rail 104mA; -12V rail: 38mA
Reviews
Write Your Own Review 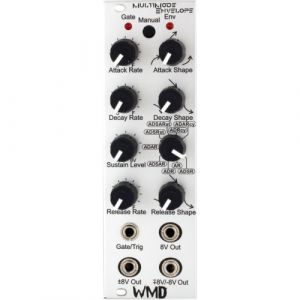