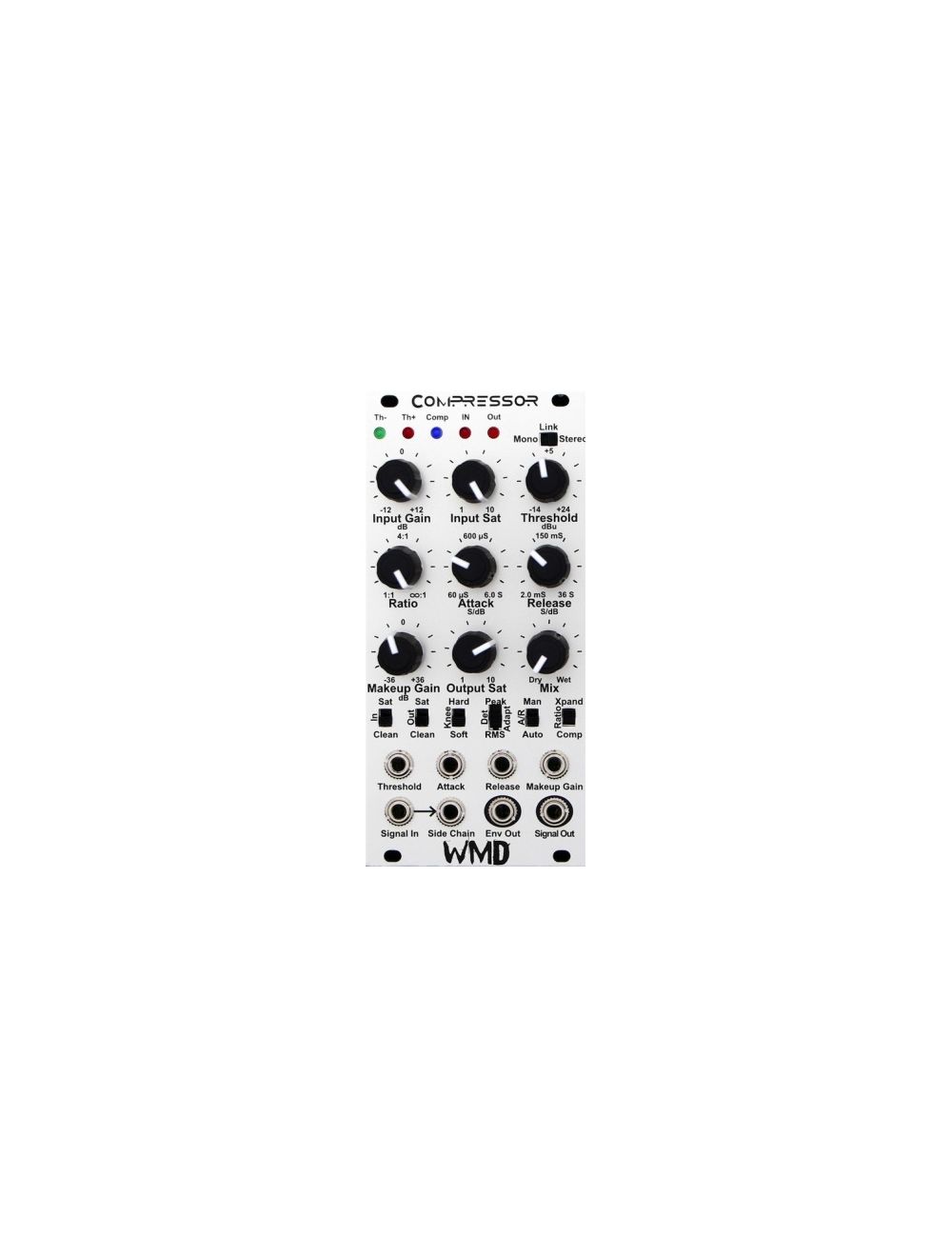 Be the first to review this product
The WMD - Compressor is one of the few analog eurorack compressors out there. You might think of compressors first as outboard tools that enhance or modify the final output of your mix, however, a modular compressor is something that can take an interesting role in feedback patches or other applications in a modular setup!
€268.80
Availability: In stock
SKU
wmcomp
Add to Wish List Add to Compare
WMD - Compressor is available to buy in increments of 1
Details

The WMD - Compressor is one of the few analog eurorack compressors out there. You might think of compressors first as outboard tools that enhance or modify the final output of your mix, however, a modular compressor is something that can take an interesting role in feedback patches or other applications in a modular setup!

The WMD Compressor is designed to serve all of your normal dynamics processing needs, but it pushes boundaries further. It can subtly calm resonance peaks, or it can add dynamic character to a bass patch. It can also completely crush and distort a patch into a pumping breathing monster. Dynamics processing is not something typically considered in modular synthesis, especially subtractive patches. With many synthesists doing fully modular feedback patches, percussion and outboard processing with their modulars, compression now has a place in a eurorack.

The WMD Compressor is designed around the THAT 4301 core, a high end dynamics processor. It has been adapted for modular levels, but will work with +4 line level signals as well. It is designed to be transparent, using only ultra low noise opamps, but it also has variable input and output saturation to add some character and distortion.

The WMD Compressor is a feed-forward design where the input signal is analyzed to determine how much compression is necessary. This architecture is powerful and fast and offers plenty of control over the compression control signal.

The signal path is short, consisting of an input gain stage, the compressor VCA stage and then the final output mix stage. The input stage uses a TLE2027 ultra low noise and low offset opamp. The VCA and output mix use OPA1641 low noise high-headroom opamps. The maximum output swing is close to the supply rails at 22Vpp.

The Manual Attack/Release circuitry is based on principles designed into the Multimode Envelope. It is incredibly fast and can range to a near stop. This allows you to use the envelope as an effect, and use the CV to halt compression if desired. Too fast of both Attack and Release times will introduce distortion as the follower attempts to follow the signal itself rather than the envelope of the signal.

The Side Chain lets you use another signal to control compression of the input. This lets you duck a bass sound for the kick, or duck a mix for voiceover work, or distort a lead when something else is happening. The Side Chain is very useful for adding dynamics to a patch quickly and easily. It also lets you use the Compressor to work in feedback mode, where the Compressor controls the input to a filter, and the output of that filter is run through the side chain; then when resonance starts to distort the signal, the input is dropped down to compensate. This allows for very smooth resonant patches.

The Input and Output Saturation circuits are voiced differently from each other. The input side saturation works with the input gain control to give a very soft clipping. Lots of 2nd order harmonics to warm your signal here. Input saturation will be present on the Dry side of the Mix control as well as be passed through to the follower and the compression core. Output saturation is active on the Compressor's VCA circuit. It can clip much harder than the input side. Output saturation is great for distorting the initial transient from a slower attack, giving the initial hit more harmonics and a punchy timbre.

Input Gain - Sets the input level on the Signal In jack. Range is +-12dB. 12 o’clock is unity gain. This level is normaled to the Side Chain input. Input level is indicated on the red In LED.

Input Saturation - This knob and control switch determine the amount of input side saturation. The circuit is a soft clipper that begins to clip at +-4 volt peaks. Switch must be up for knob to be enabled.

Threshold - This sets the input level where compression starts to happen. Its range from -14dB to +24dB covers the modular range. There is a CV input for this control that is added to the knob value. Th+ and Th- LEDs indicate whether the input signal is above or below the compression threshold.

Ratio - Controls the amount of compression as a function of input level to output level. So, for every dB in level increase past the threshold, you get X level increase in the output. 4:1 ratio means 4dB input to get a 1dB change in output. ∞:1 is a limiter where the input signal is limited to the threshold level.

Attack - This knob sets the amount of time taken for the onset of compression. Rotate clockwise for a slower attack. Attack may be affected by the CV input. Attack is measured in Seconds / dB.

Release - Controls the amount of time to open the compressor after the input signal goes back below the current level of compression. Rotate clockwise for longer release. Release may be affected by the CV input. Release is measured in Seconds / dB.

Comp LED - This blue LED shows the compression level to give rough feedback as to how much compression is taking place.

Makeup Gain - This controls the amount of gain at the output stage. Range is -36dB to +36dB. Use higher settings to bring the level back up after high compression. If using Xpand mode, set this lower than 0dB to avoid high output levels. There is a CV input to further control the amount of Makeup Gain.

Output Saturation - This switch must be enabled for the knob to have an effect. Moderately Hard LED saturation begins at +-6 volt peaks.

Mix - This knob mixes the dry input signal with the wet output signal, allowing for simple parallel compression. Also use it as a way to compare input to output easily. This is the final output to the Signal Output jack. Its level is indicated on the red Out LED.

Side Chain - This input drives the level detector of the compressor. When nothing is plugged in, the Input signal is normaled through to the detector. This allows you to use the compressor as a ducker or expander with other signals.

Envelope Out - This output jack produces the Compressor’s control signal for use in other places in your modular.

Link - If you have two WMD compressors, you can link them together with an 1/8” cable on the back. Flipping each Compressor’s Link switch to Stereo will connect the two detectors together for true stereo bus compression. Knobs must be set the same for both channels to truly behave the same, as only the detector information is shared.

The Compressor is 12 HP.

The depth from the back of the panel is roughly 25mm.