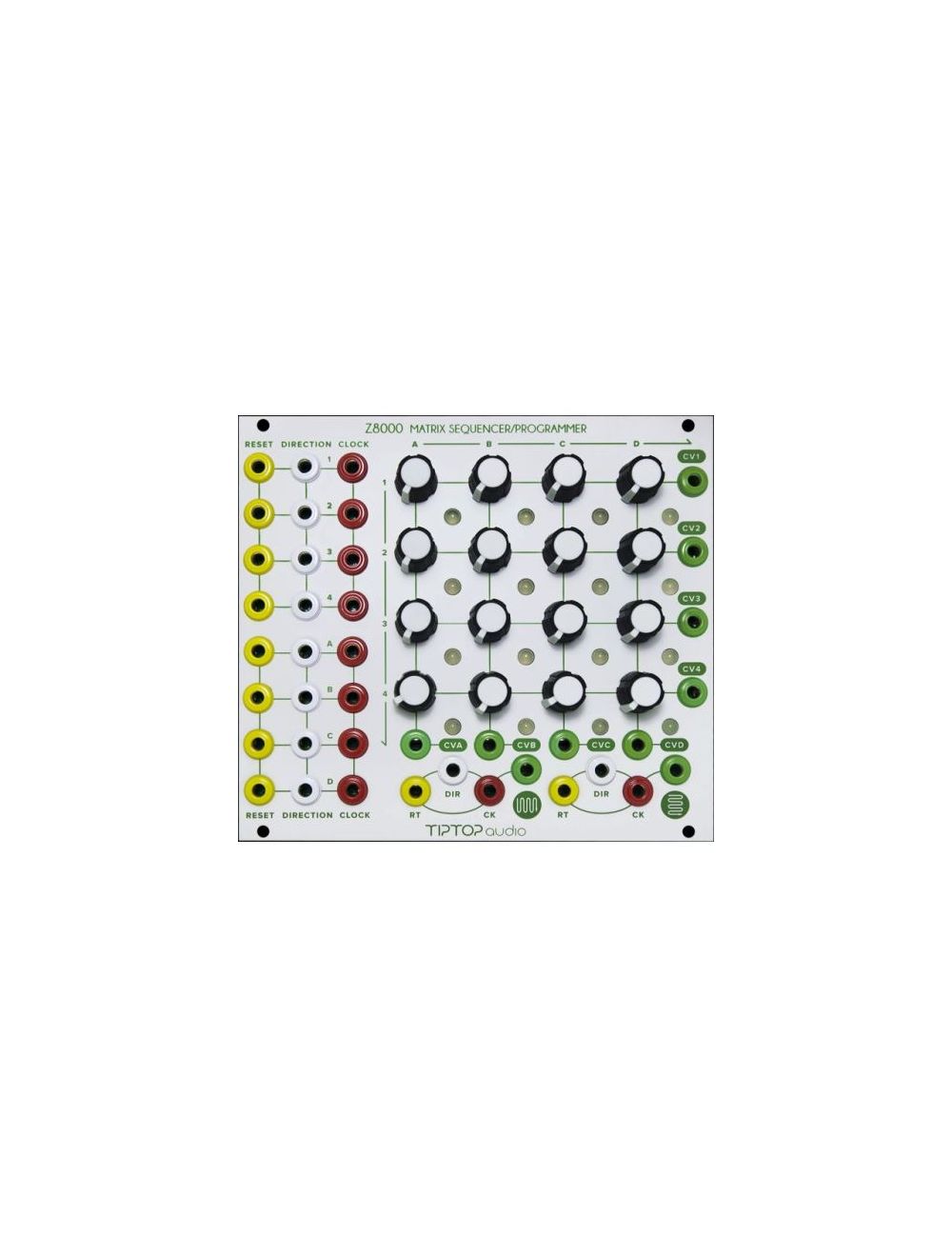 Be the first to review this product
The Tiptop Audio - Z8000 Matrix Sequencer brought a similar concept to another well-known concept in electronic music: the matrix mixer which added new dimensions of a mixture of signals into the concept of the CV sequencer: the result is, that you have different lines and rows of melodies that are interacting with one another.
€351.60
Availability: Out of stock
SKU
Z8000
Add to Wish List Add to Compare
Details

The Tiptop Audio - Z8000 Matrix Sequencer brought a similar concept to another well-known concept in electronic music: the matrix mixer which added new dimensions of a mixture of signals into the concept of the CV sequencer: the result is, that you have different lines and rows of melodies that are interacting with one another.

The Tiptop Audio - Z8000 Matrix Sequencer is a powerful tool in a small package. Contained within it's structure are the following:

Thus, giving you a total of ten sequencers in all.:

Each and every sequence has its own individual CV output as well as Clock, Direction & Reset inputs.:

The grouped 4 step sequencers each share a normalized connection to the Clock. Allowing, for instance; a single clock to guide all four horizontal 4 steps from only one connection. The same applies for the four vertical sequences. (ex: plugging in a new timing signal into the third Clock while the first Clock still has its jack in place would make sequences 1 & 2 of the group run at a separate rate than sequences 3 & 4.) On the other hand Direction & Reset Inputs are not normalized in order to keep these functions independent. The Tiptop Stackcable is ideal to be used to distribute a Reset signal to many sequences at once.:

Reset is simple. A gate high signal triggers that particular sequencer to reset back to step one.:

The Z8000 has a very fast response time and will be triggerd by long and even very short pulses. The electrical noise caused by inserting a plug into a normalized clock input might cause some of the sequencers to step, this behavior is normal. A cascaded Reset signal using Stackcables or mults will reset all sequencers in a group back in line if desired.:

The Z8000 inputs are idealy to be used with pulses but defently are not restricted to pulses only.:

The Z8000 uses multicolored LEDs to help with visual feedback. The red lights are assigned to the eight 4 steps, the green lights are assigned to the two 16 steps & lastly the yellow lights engage when a 4 step red light & 16 step green light intersect that specific LED. In addtion to that, when two 4 step sequencer red lights engage the light intensity of that led increases by about 35%.:

Whether the sequencer is clocked or not, its knobs and lights are still on and functioning. (ex: the red led of step A of sequencer 1 is on, plug the CV1 out and turn that knob, you will hear that the step is “alive”.:

The Z8000 is very simple to use but can create some extremely complex control patterns. Each sequencer can be made to step very slow or very fast up to audio rate. Each CV output has the capability to drive many inputs. One of the fun applications with the Z8000 is to patch one of the sequencer’s CV out back to the clock frequency input, creating a “swing” in the movement from step to step. The Z8000 has 10 CV outputs that can modulate 10 prameters in your modular, having them change polyrhythimcally, making things move.:

Although the word ‘sequencer’ is mostly known as playing a sequence of tones (controlling the pitch of a VCO), the Z8000 is by no means restricted to doing only that. The Z8000 is a note sequencer but also a modulation sequencer and a programmer of events that happen in a predetermined time.:

The Z8000 modular structure makes it interesting to combine with various clock modifiers such as Clock dividers, Clock sequencers, etc.:

The Z8000 will work well with Quantizers to create melodies within a scale and analog switches to route the CV outs to diffrent destinations on your system.:

Trigger delays or EGs can be used to phase the clock signal and are very useful in creating a “laid back”, off the grid groove or feel. :