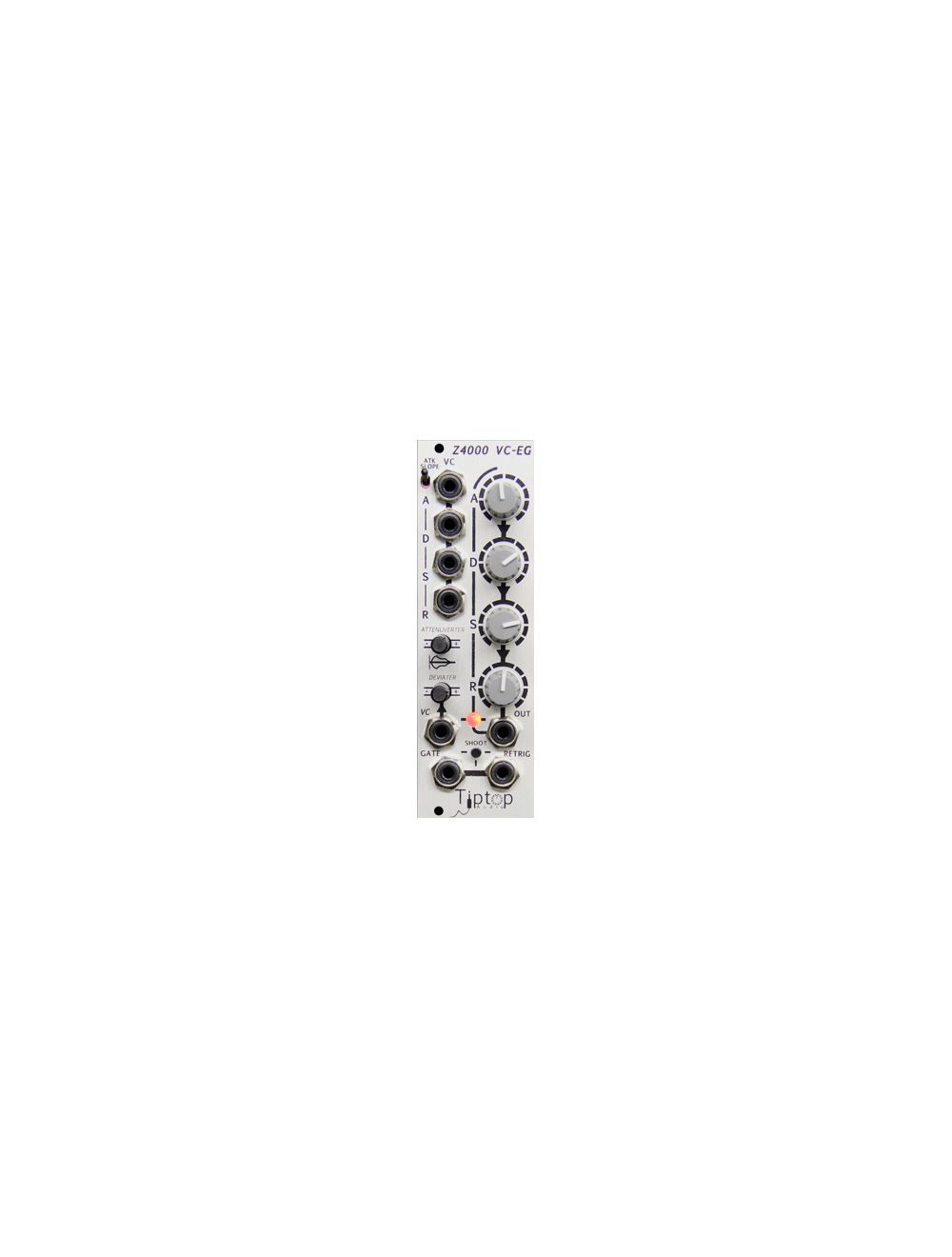 Be the first to review this product
The Tiptop Audio - Z4000 Voltage Controlled Envelope Generator is one really handy and careful design! At first you might not get used to the range of the knobs, especially the attack knob but after a few tries, you start "feeling" them:: you realise that you wish all your modular envelopes had the same setup. ÿ
€170.40
Availability: Out of stock
SKU
Z4000
Add to Wish List Add to Compare
Details

The Tiptop Audio - Z4000 Voltage Controlled Envelope Generator is one really handy and careful design! At first you might not get used to the range of the knobs, especially the attack knob but after a few tries, you start "feeling" them:: you realise that you wish all your modular envelopes had the same setup. ÿ

The Tiptop Audio - Z4000 Voltage Controlled Envelope Generator is a snappy voltage controlled analog envelope generator with built-in cv processor for scaling, inverting, and voltage control deviating of the envelope shape. the z4000 generates an envelope made of the four classic segments, attack, decay, sustain, and release, in which each segment can be manually set or dynamically set under voltage control.

Control knobs for the attack, decay, and release segments are scaled to have the first 0-50% of the knobs' rotation angle dedicated to high resolution adjustment in the millisecond range; this gives you a fine adjustment to reduce the clicks and pops to a minimum with the least amount of delay and loss in snappiness. On the other hand, the rotation of the knobs from 50% to 100% provide envelopes that can last several minutes and up to infinity.

The output levels are fully adjustable with signals that can reach up to 10v in either polarity and can be mirrored into the opposite polarity or clipped using the voltage controlled deviater scaler. a bi-color led indicates intermediate values in both polarities and their crossfade state.

A shoot button is provided to let you fire the enevlope manually. the z4000 also provides the classic interface to a cv/gate keyboard with the addition of a retrigger input for legato notes. going down to nuts and bolts, the z4000‘s smooth and snappiness is formed by a four-segment active-charge discrete circuit which is an extended version of circuits found in classic two-segment rise/fall transient generators.

Each of the four segments in the Z4000 are voltage controlled. The effective voltage input range for each input is 0 to 5V.

The Attneuverter is a voltage attenuating and inverter; this means that in the 50% position, the Z4000 willl output no signal, turning the knob CW the envelope will become a positive voltage and CCW will turn it into a negative voltage. The LED will indicate those states with either an unlit, red, or yellow state, respectfully.

In addition, the envelope signal passes through yet another cv processor circuit called the Deviater. What this does is add a static voltage to the signal, this is a mathematical analog function of summing. The static voltage can be set to negative (CCW) or positive (CW). So when summing the static voltage with the envelope voltage, a lot of interesting things can happen such as offsetting, mirroring and clipping. But voltage manipulation doesn't end there, the Devater includes a VC input allowing you to inject even more static signals or dynamic signals into the analog “calculator”. Go wiled with the Deviater plug in audio or another envelope?

In its classical use, the retigger input is there to provide retriggering of the envelope when used with CV/Gate keyboards playing legato notes. In this case, the envelope will retrigger even if it is in the ON state, providing an accent effect to the new note that had been played.

But the use of the retrigger doesn't end there: using pulses other then the gate input signal will give an extra cycle of the attack segment, this can be very musical and fun to play with. Use clock dividers or any other pulse source to experiment.

How annoying it is to lose a module due to reverse plug-in? The Z4000 is totally immune to that; no matter how you are going to hook it up, it will not cause it to burn. This protection is infinite, meaning that even if you keep it connected in the wrong way for very long time, there will still be no issues and no overheating or damaging of the module or the power supply.

We hope you will enjoy your Z4000, it’s an analog envelope made with love.