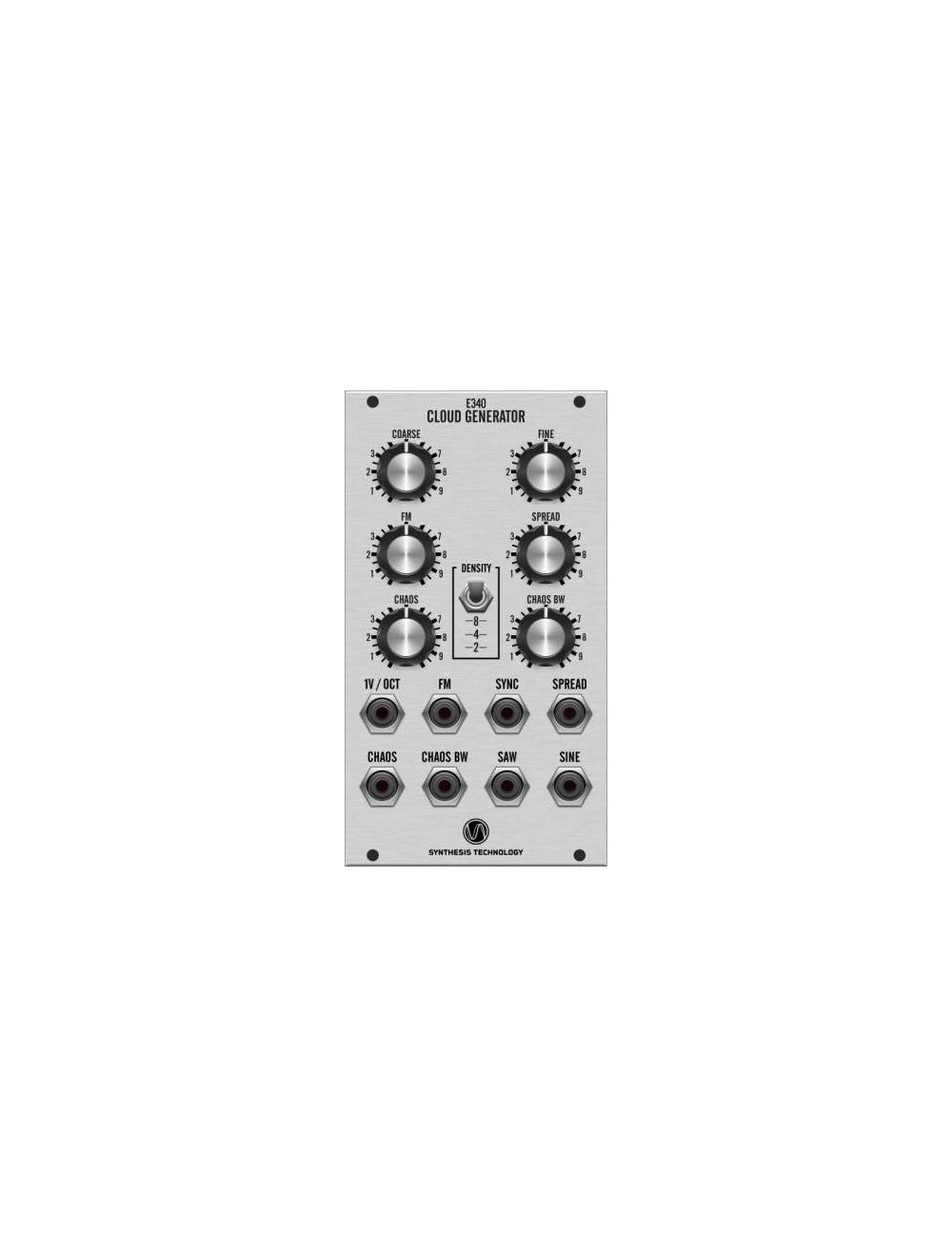 The Synthesis Technology - E340 Cloudgenerator might look like a machine with chaotic oscillations and all that randomness that might not be for everybody. However, this module is capable of generating clean tones too. Two-tone chords and nice monophonic oscillations are a switch away. It can be very musical indeed.

The Synthesis Technology - E340 Cloudgenerator might look like a machine with chaotic oscillations and all that randomness that might not be for everybody. However, this module is capable of generating clean tones too. Two-tone chords and nice monophonic oscillations are a switch away. It can be very musical indeed.

The Synthesis Technology E340 contains eight sine and sawtooth VCOs with unique modulation capabilities. The term "cloud oscillator" was first used by ambient musician Robert Rich when he was recording his Bestiary album. Robert wanted to create a "buzzing, swarming cloud of sine waves," and after some experimentation, he was able to create such a timbre using 24 individual MOTM modules. Now the technology is available to generate this type of sound in a 14hp wide Eurorack module.

In its basic form, the E340 is a two-output wavetable VCO that generates 16 waveforms at once. Modular users quickly discover that in order to get large, fat notes, multiple oscillators are needed that are slightly detuned. This can get expensive quickly, and then you have to deal with the tracking differences, additional mults for the cables, and mixers for the outputs. The E340 combines all of these, eliminates the tracking errors, and adds the added dimension of being able to control just how "buzzy" the cloud can go. If spread and chaos are set to 0, the E340 behaves like a standard analog vco, but with a very pure sinewave output (less than 0.3% THD) and a standard sawtooth wave.

Simple detuning can sound really good, but the E340 adds two controls never seen on any modular: Chaos and Chaos Bandwidth (BW). Once you set the degree of detuning using the spread control, you can then add animation to the detuning by dialing in Chaos. Chaos randomly "wiggles" every VCO's pitch, while the Chaos BW controls the speed of the wiggle. This adds a "swarming of bees" effect at extreme settings, and at low settings, the subtle pitch changes are similar to a slow-speed Leslie speaker effect.

If monster bass lines and sawtooth leads (like the supersaw on the old Roland JP-8000) are what you want, the E340 delivers like no other VCO. You can select two, four, or eight detuned sawtooths and vary the relative phasing under voltage control. And like the JP-8000, the E340 has a sync input as well.