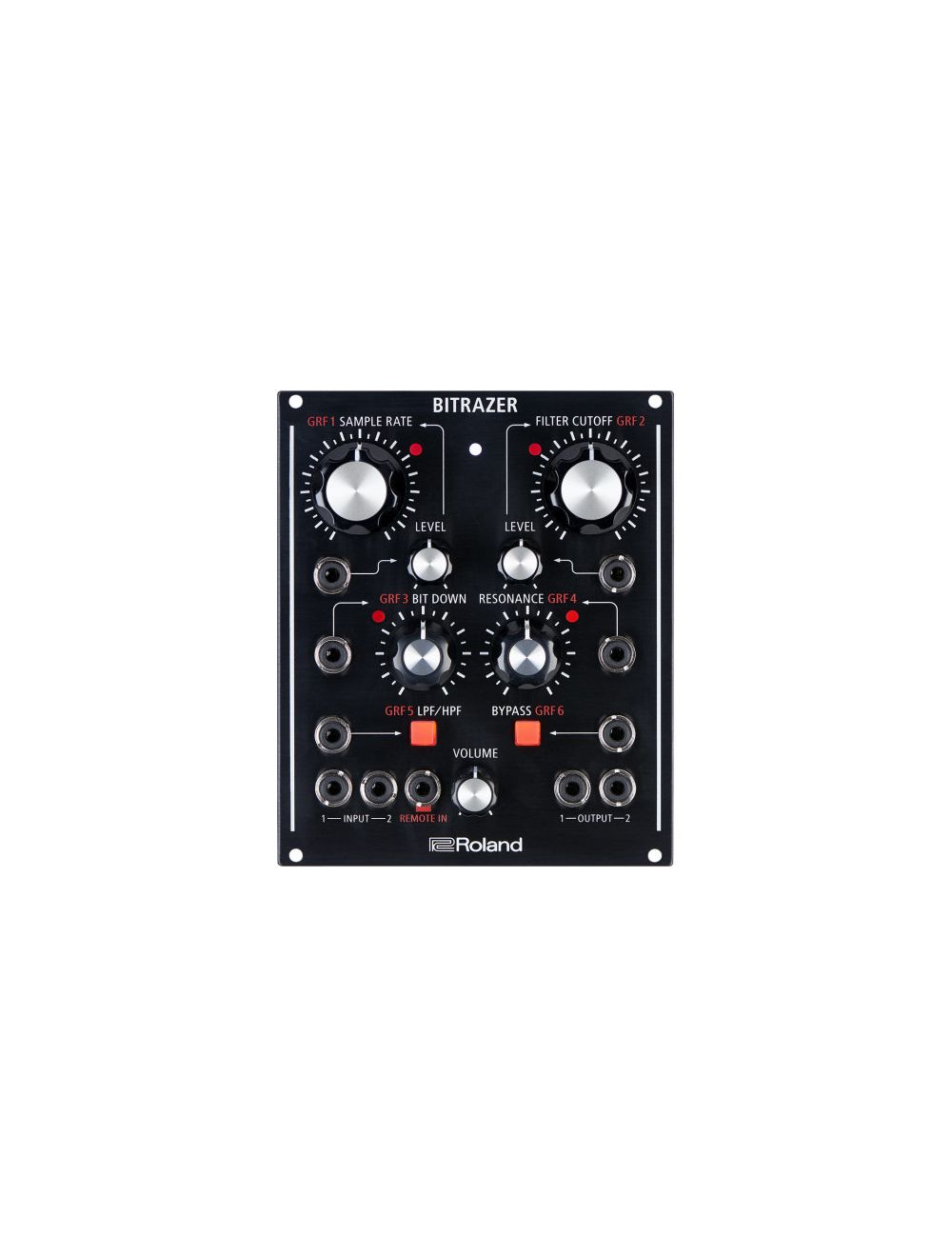 Be the first to review this product
The Roland - Bitrazer is Roland's own take on the concept of bitcrushing. Bitrate and sample rate reduction in meaningful ranges, musical character and the complete voltage control makes this module stand out among the digital sound processors in eurorack format. The sound-quality is also no less than crystal-clear.
€199.20
Availability: Out of stock
SKU
rbr
Add to Wish List Add to Compare
Details

The Roland - Bitrazer is Roland's own take on the concept of bitcrushing. Bitrate and sample rate reduction in meaningful ranges, musical character and the complete voltage control makes this module stand out among the digital sound processors in eurorack format. The sound-quality is also no less than crystal-clear.

ROLAND - BITRAZER - PROGRAMMABLE CRUSHER EFFECT WITH CV/GATE AND EURORACK COMPATIBILITY BITRAZER is a unique modular effect combining intense bit and sample rate crushing effects and unprecedented control and flexibility. Able to be used as a tabletop unit or as a Eurorack module, and with an array of CV/Gate inputs, this compact 21 HP unit has a wide range of uses from studio production to live performance. Not only for modular synth users, BITRAZER is perfect for keyboard players, guitarists, DJs or any adventurous musician looking to expand their sound. Carefully crafted in Japan, BITRAZER has large, ultra-smooth controls with over 16 million steps of resolution and is fully re-programmable via computer or tablet. Intense bit and sample rate destruction CV/Gate parameter control including sample rate, bit depth, and filter Tabletop unit or 21 HP Eurorack module using AC adaptor or Eurorack power 24-bit knobs with over 16 million steps of resolution Re-programmable via Mac, PC, iOS, Android application 15 patchable submodules, expandable with free updates 2 inputs and 2 outputs with dual-mono or stereo capability AIRA Link compatible 24bit/96kHz audio interface Carefully crafted in Japan Intense bit and sample rate destruction BITRAZER is an intense bit and sample rate crusher effect that can add edgy character or create total sonic mayhem. Using the large comfortable controls or standard 1/8" patch cables, you can independently control the sample rate, filter type, cutoff, resonance, bit depth, and signal bypass. Both the sample rate and filter cutoff parameters have input level controls for adjusting the modulation range when controlled from an external source. Two inputs and two outputs make BITRAZER a stereo-capable, 24bit/96kHz audio interface for Eurorack systems and AIRA Link USB compatibility gives it single-cable, plug and play connectivity with the MX-1 Mix Performer.

While it sounds great out of the box, you can fully customize BITRAZER’s internal signal path by re-patching its array of virtual sub-modules via a custom application that works on Mac and PC as well as iOS and Android devices. Submodules are re-patched through a simple and intuitive drag and drop interface that even lets you choose which parameters are assigned to the high-resolution “GRF” knobs. You can reprogram BITRAZER in realtime via USB connection or save and recall patches with a simple audio signal. You can even share patches with other BITRAZER users.