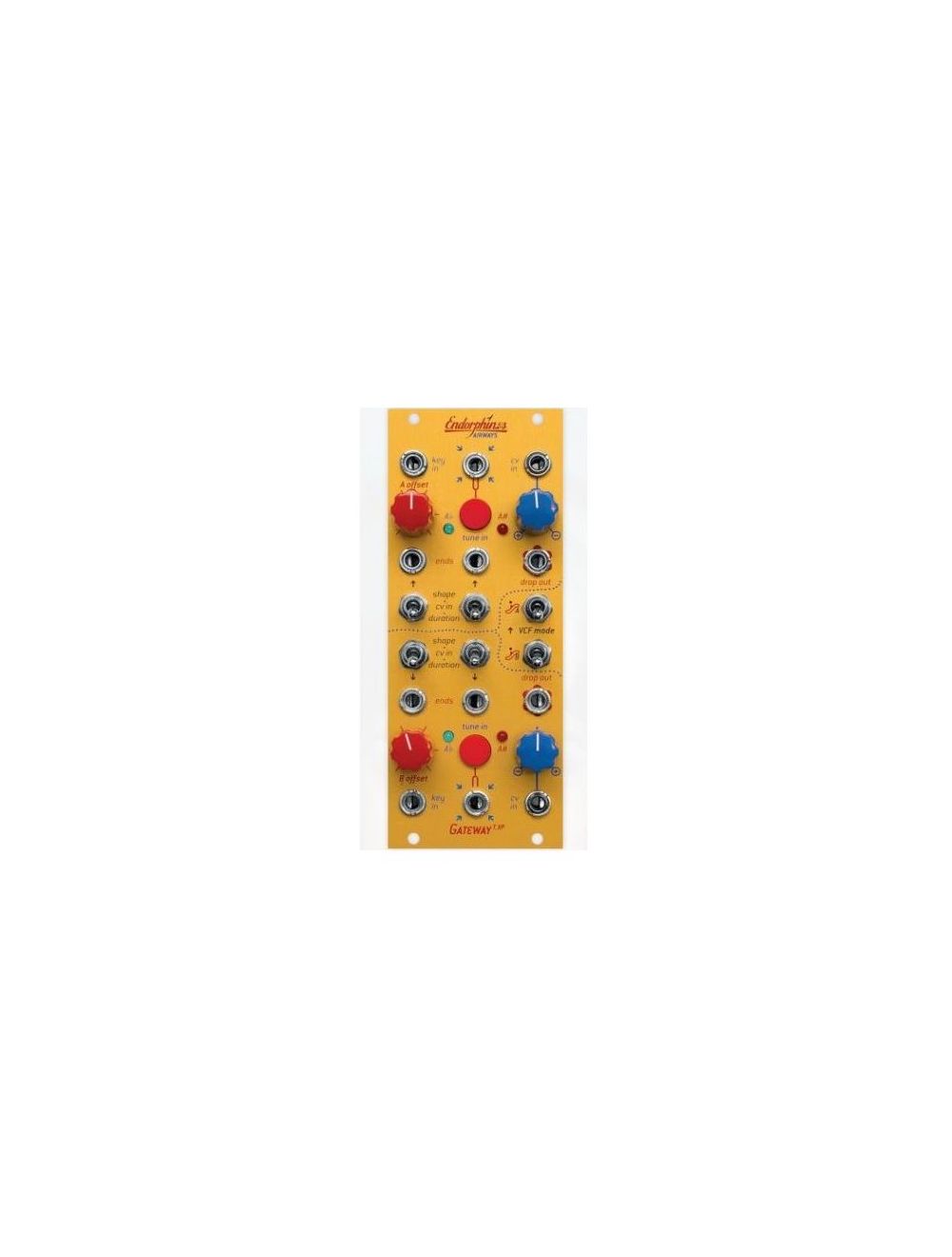 Be the first to review this product
The Endorphin.es - Gateway is the expansion module of the Terminal which is the first envelope generator and VCA combo created by this group of amazing designers. Thanks to care for details, the extra effects, this module is so paired to the Furthrrrr VCO that no one could really dream better. The vactrols are replacable in the circuit, so your own flavours of slopes and plucks can be obtained with different components.
€237.60
Availability: In stock
SKU
EPGW
Add to Wish List Add to Compare
Endorphin.es - Gateway is available to buy in increments of 1
Details

The Endorphin.es - Gateway is the expansion module of the Terminal which is the first envelope generator and VCA combo created by this group of amazing designers. Thanks to care for details, the extra effects, this module is so paired to the Furthrrrr VCO that no one could really dream better. The vactrols are replacable in the circuit, so your own flavours of slopes and plucks can be obtained with different components.

• Expands and gives you access to Terminal’s deep functions via the faceplate which gives you more control over Terminals envelopes and the capability to use them as oscillators.

• Improved tuners with revolutionary Autotune algorithm – tune your VCOs automatically in a second to the signals nearest A note.

• Works as a dual 1+1 attenuverting mixer with DC-offset shift.

1. Terminal operated by Endorphines Airways is a versatile and complex module. This makes it almost impossible to put all its controls on the faceplate. That’s why some rarely used functions could only be accessed with jumpers on the backside of the module.Some parts of the Terminal became so advanced that an external module become necessary to open up its full potential. That’s why we presented the Terminal XPansion module. It features two identical sections. The upper section of the module corresponds with Airplane A and the lower one with Airplane B.

3. VCF Mode: If the VCF mode switch is turned UP it enables full 12db/oct filtering on the appropriate Gate A or B. GatewayT_XP is essentially a dual 1+1 channel mixer for CV (as well as audio) signals. Key in is an input for CV that comes from your Keyboard your MIDI-to-CV converter or quantizer. F.m. in is an input for other audio signals to frequency modulate Gate A or B in looping mode or other signals that are passing through equipped with an appropriate attenuverting knob. A / B Offset is a manual offset knob that adds from 0 to approximately 6.5V mixed together with Key and FM inputs. The final signal comes out at DROP out jack. So far all we have here is a simple CV mixer. Now comes the special part – the tuning possibilities.

4. The Tuner input jack for each Airplane is the tuner input for audio signals. By default, each end of decay triggers are routed there via the normalled knobs however using any audio signal as an input source is possible. The input features Schmidt trigger input – i.e. it will understand even very low non-modular level signals like line out or guitar pickup signals. Afterwards the tuner is functionally identical to the one in our famous Furthrrrr Generator. The signal is being analyzed if the tune is higher or lower to the nearest A note. When the incoming signal is higher than the nearest A note the red LED will light up when it is lower the blue LED will do so. And here is where the magic starts. Assuming you have put the drop out signal into your oscillator’s 1v/oct key input and then press the tune to A button the module will output stepped CV at the drop out jack and will tune your oscillator to the nearest A-note (the lower or higher one – depending on which A note is closer). The CV from the drop out output may also be connected to the Terminal’s Key in input to tune Terminal’s oscillators when Terminal is in Looping mode. The tuning time depends on your oscillator frequency – in lower range it may take up to a 1 second and in the higher ranges it will tune almost instantly. Play around if it a little to get used to the various response timings of the tuner. If you press the tune to button for more than 2 seconds you will turn the tuner off (i.e. will null the applied CV offset generated by the appropriate Autotune function generator). After pressing the button again the tuner will tune the signal to the nearest A again. This technique is extremely useful for live performances, especially when playing in a band. Just press an A note on your MIDI keyboard so it will output proper CV for an A note. Afterwards press the TUNE to A button and the module will automatically tune your generators to a proper A note. You have to connect the GatewayT_XP to your Terminal with cables to the appropriate Terminal channels A or B. GatewayT_XP can either run of its own power cable or will draw its power from Terminal via the cables that connect GatewayT_XP and Terminal. Two jumpers on the backside of the module: E1 FM_x10 and E2 FM_x10 amplify the input signal at CV IN of both parts of the module in ten times (when the jumper is installed). That’s useful to amplify the line-out signal up to approximately ten times – 1V x 10 times = 10Volt – (e.g. from iPAD or MP3-player) which is usually ~1V to a modular ~10v level.

Power consumption of Terminal Xpansion is the following: max 70 mA from positive +12 volts rail and max 30 mA from negative -12 volts rail or up to 100 mA in total.

No +5 volt bus power is required.

Unit may be powered: either to a busboard directly (without having a Terminal module, but then the 6 switches in the middle can’t be used) or a powered Terminal module via the two simultaneously connected 10-pin ribbon cables (mind the red stripe on the cable to fit the white line on the back side of each connector).

DO NOT CONNECT THE MODULE TO THE TERMINAL AND POWER BUS-BOARD SIMULTANEOUSLY. Connect it either to the Terminal (preffered for using all the switches) or to the bus-board (for standalone usage without Terminal). 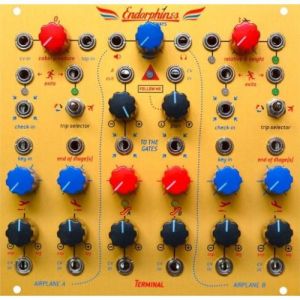