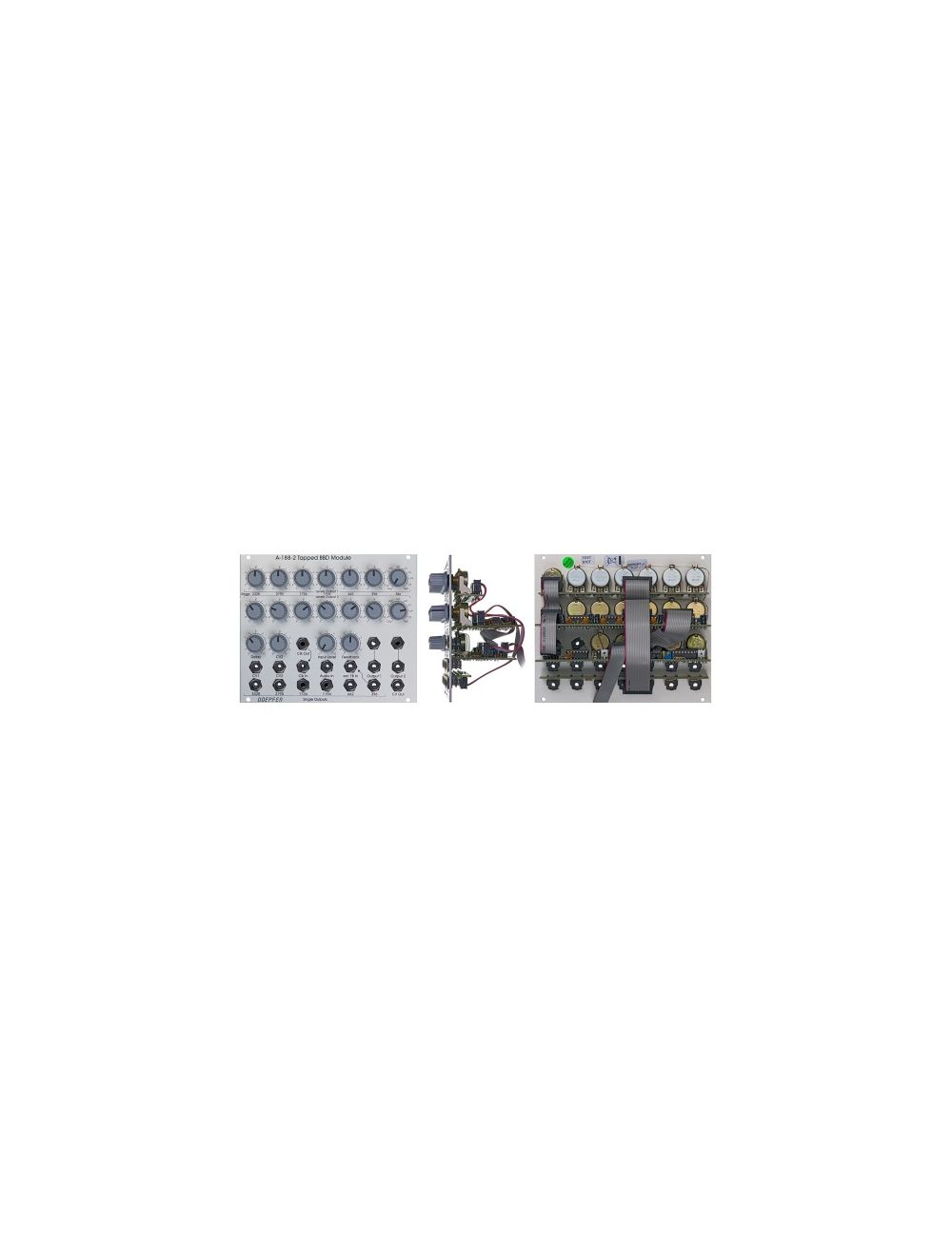 Doepfer A-188-2 Tapped BBD Module is a module which is based on the principle of a lot of chained analog samplers (sample-and-holds) chained and controlled by a high-speed clock on a microscopic scale - that is essentially the heart of the BBD-circuit. The less stages, the shorter delay effects, the more stages, the longer delay effects, resulting in crunching the audio signal. This version of the module offers you several different lenghts of BBD delay.

Doepfer A-188-2 Tapped BBD Module is a module which is based on the principle of a lot of chained analog samplers (sample-and-holds) chained and controlled by a high-speed clock on a microscopic scale - that is essentially the heart of the BBD-circuit. The less stages, the shorter delay effects, the more stages, the longer delay effects, resulting in crunching the audio signal. This version of the module offers you several different lenghts of BBD delay.

Doepfer A-188-2 Tapped BBD Module is another module that is based on a so-called Bucket Brigade Device (BBD). If you are not familiar with BBDs please refer to the A-188-1. There you can find some details about this special type of circuits.

The module has available two separate mixing sub-units. For both mixers the levels and polarities of each BBD output can be adjusted to obtain two different mixtures of the BBD outputs. A new type of potentiometers with center detent and center terminal is used for the BBD mixing controls to have a better feel for the neutral position. Each mixer has a wet/dry control at its output that allows choosing between the pure input signal (original), the BBD mix or anything in between. The two outputs can be treated as stereo outputs but it is also possible to use one of the outputs for other applications (details in the next paragraph).

The A-188-2 has a feedback section available that is very similar to the one in the A-188-1. But as we now have 6 different BBD outputs available 6 different feedback types are possible. The feedback input socket is normalled to the "396" output (not to "1194" as shown in the scheme, the front panel is correct). But by patching the feedback socket to any of the single output sockets another BBD tap can be used for the feedback to obtain different sounds. Even external feedback processing is possible (e.g. with a VCA for voltage controlled feedback). The feedback control has polarizer function, i.e. the neutral position is at the center. Left from the center the feedback signal is subtracted from the input signal, right from the center it's added (negative/positive feedback). Even for this potentiometer the new version with center detent is used. A special feedback can be obtained if one of the mix outputs is used for the feedback function. In this case for each tap the positive or negative feedback share can be adjusted. This leads to multiple peaks and/or notches in the frequency response of the module.

For each tap of the BBD a separate output socket is available. These sockets can be used for changing the feedback loop - as mentioned above -, for voltage controlled mixing of the taps - e.g. with the voltage controlled mixer A-135 or other applications that require access to each single tap.

The A-188-2 uses the same high speed VCO (HSVCO) for the BBD clock as the A-188-1. The clock and consequently the delay time can be controlled manually (delay control) and by the two control voltage inputs CV1 and CV2. The sensitivity of CV1 is approximately 1V/oct. CV2 is equipped with a polarizer (a new type of potentiometers with center detent). The HSVCO has a clock output available that is normalled to the clock input socket. These sockets can be used to link different BBD modules and to run them with the same clock. But even other applications with frequency dividers (e.g. A-163) or PLL (e.g. A-196) are conceivable. A voltage composed of the manual delay control, CV1 and CV2 is available at the CV out socket, e.g. to control an external clock suppression filter as the A-188-2 is not equipped with such a filter (same as for the A-188-1).