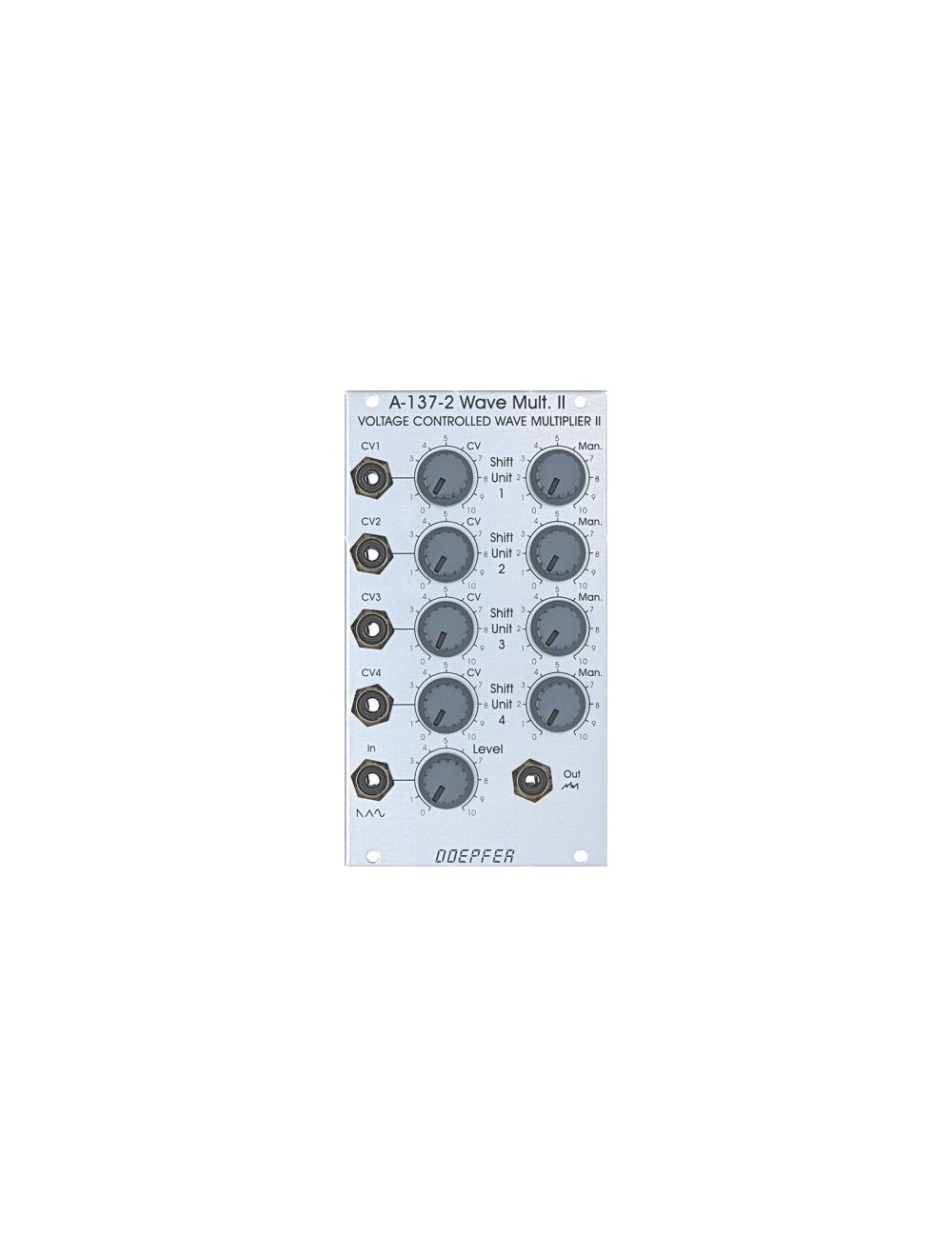 Be the first to review this product
If you are looking for the top10 Doepfer modules, the Doepfer A-137-2 Wave Multiplier II is a part of that list. Users often praise the concept and the outputs signals: it enriches your basic waveforms so much, you will easily forget about what they were before.
€76.80
Availability: In stock
SKU
A-137-2
Add to Wish List Add to Compare
Doepfer A-137-2 Wave Multiplier II is available to buy in increments of 1
Details

If you are looking for the top10 Doepfer modules, the Doepfer A-137-2 Wave Multiplier II is a part of that list. Users often praise the concept and the outputs signals: it enriches your basic waveforms so much, you will easily forget about what they were before.

Module A-137-2 is another version of a wave multiplier. In contrast to the A-137-1 Wavemultiplier I the A-137-2 generates four phase-shifted copies of a VCO signal applied to the audio input. The four shifted signals are added to the original signal to obtain a fat sound similar to five independent VCOs. The phase shifting is made by a simple circuit that works only for sloped signals like sawtooth, triangle or sine, but not for rectangles or pulses:

Working principle: The audio input signal (typically a sawtooth, triangle or sine wave from a VCO) is compared with a slowly varying control voltage (CV Shift In). The output of the comparator is a rectangle wave with variable pulsewidth. When the output of the comparatur is added to the input signal (a sawtooth in the example) with the correct level relation between both signals one obtains a phase shifted sawtooth. The left picture shows the incoming sawtooth wave on top. The two horizontal dashed lines (blue and orange) indicate two different comparison levels. Below the incoming sawtooth the two resulting comparator outputs (rectangle waves) and the two resulting shifted sawtooth waves are shown. It is not a "real" phase shift but an algebraic function. But the result is virtually the same. One could obtain the same function even with several comparator modules A-167 and mixers A-138a/b or polarizing mixers A-138c. But this would require a lot of modules.

The module has available four manual shift controls and four control voltage inputs with attenuators for the four internal shifting circuits. Typical sources for these inputs are LFOs, VCLFOs, random voltages, envelope generators, sequencers or other control voltage sources. Internally eight single outputs are available at single pins: the four shifted signals and in addition four rectangle outputs. A corresponding breakout module with eight sockets is in the planning stage and will be released provided that there are sufficient inquiries. The original signal and the four shifted signals are equipped with internal jumpers. If external toggle switches are used instead of the jumpers each of the 5 signals can be turned on/off individually.

The audio input is equipped with an attenuator to adjust the level for the right summation of the original and the comparator signals (as described above).

This document shows the positions of the five jumpers and the eight single outputs on the pc board: A137_2_appendix.pdf 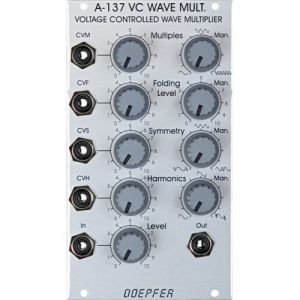