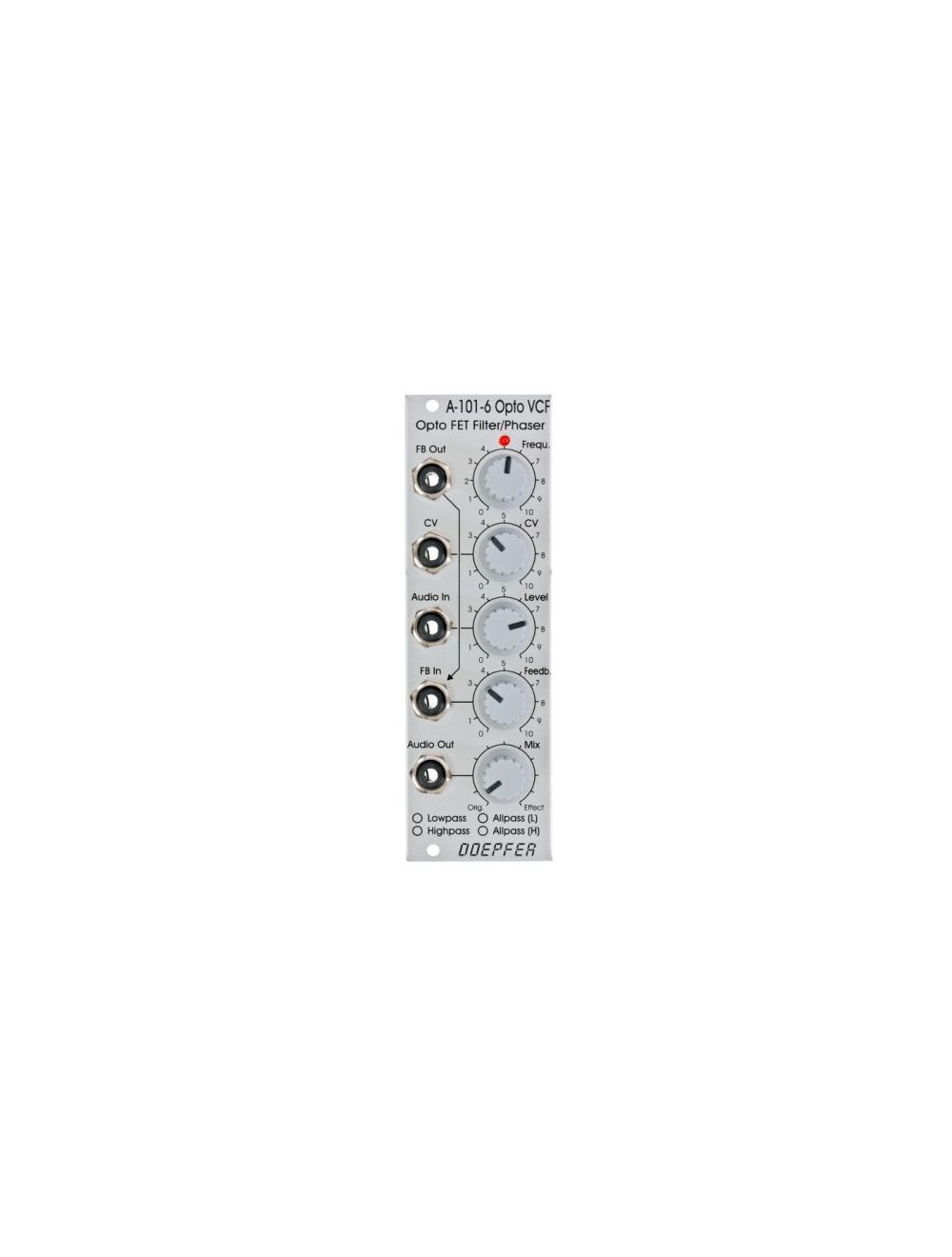 Be the first to review this product
The Doepfer A-101-6 Six Stage Opto FET VCF is a long-awaited design for the A-100 eurorack modular system. This filter is often described as soft, mellow - even its resonance is just nice to listen to: by a selection of jumpers it is up to you whether you are using it as a highpass, lowpass filter or an "allpass" phaser.
€105.60
Availability: Out of stock
SKU
A-101-6
Add to Wish List Add to Compare
Details

The Doepfer A-101-6 Six Stage Opto FET VCF is a long-awaited design for the A-100 eurorack modular system. This filter is often described as soft, mellow - even its resonance is just nice to listen to: by a selection of jumpers it is up to you whether you are using it as a highpass, lowpass filter or an "allpass" phaser.

Doepfer A-101-6 Six Stage Opto FET VCF is a new filter module that uses so-called opto FETs to control the filter frequency. Opto FETs are very similar to Vactrols but light depending field effect transistors (FETs) instead of light depending resistors (LDRs). An opto FET is a combination of a light depending FET and a LED (light emitting diode) both put into a small light-proof case. The advantage compared to vactrols is the much faster response of opto FETs compared to LDRs. This allows much faster attack/decay times and even FM effects. The disadvantage compared to vactrols is that the FET behaves as normal Ohm resistor only for small levels. With higher levels the FET begins to distort. Apart from this the notes mentioned on the Vactrol Basics page are valid. Module A-101-6 is made of six serial 6dB filter stages. The stages can be switched simultaneously to lowpass, highpass or one of two allpass types. The following schematics show one of the six serial stages in the four possible modes:

The variable resistor shown in the schematics corresponds to the opto FET. The type of filter is selected by two toggle switches or 2 control inputs. The upper switch selects between lowpass and highpass provided that the lower switch is in the LP/HP position. When the lower switch in the AP (allpass) position the upper switch is used to select between the two allpass types. Instead of the switches even external control voltages can be used (CV LP/HP, CV Allpass sockets). For this the toggle switch in question has to be in the left position. The brightness of the Opto FET LEDs and consequently the filter frequency can be adjusted manually (Frequ. control) and controlled by means of an external control voltage (CV) with attenuator. The LED at the front panel reflects the LED brightness inside the opto FETs. The resonance is controlled by the Feedback control up to self oscillation. By means of two trimming potentiometers the maximal feedback can be adjusted separately for LP/HP and allpass mode. High feedback values can be used mainly in the allpass mode to obtain very extreme self oscillation sounds. Even an external feedback signal can be used instead of the internal feedback connection (FB In socket) The Mix control is used to pan between the original signal (CCW position) and the effect signal (CW position). In filter mode (LP/HP) this control is usually set fully CW. In the allpass modes one obtains phasing sounds at center position or "pure" allpass sound in fully CW position.