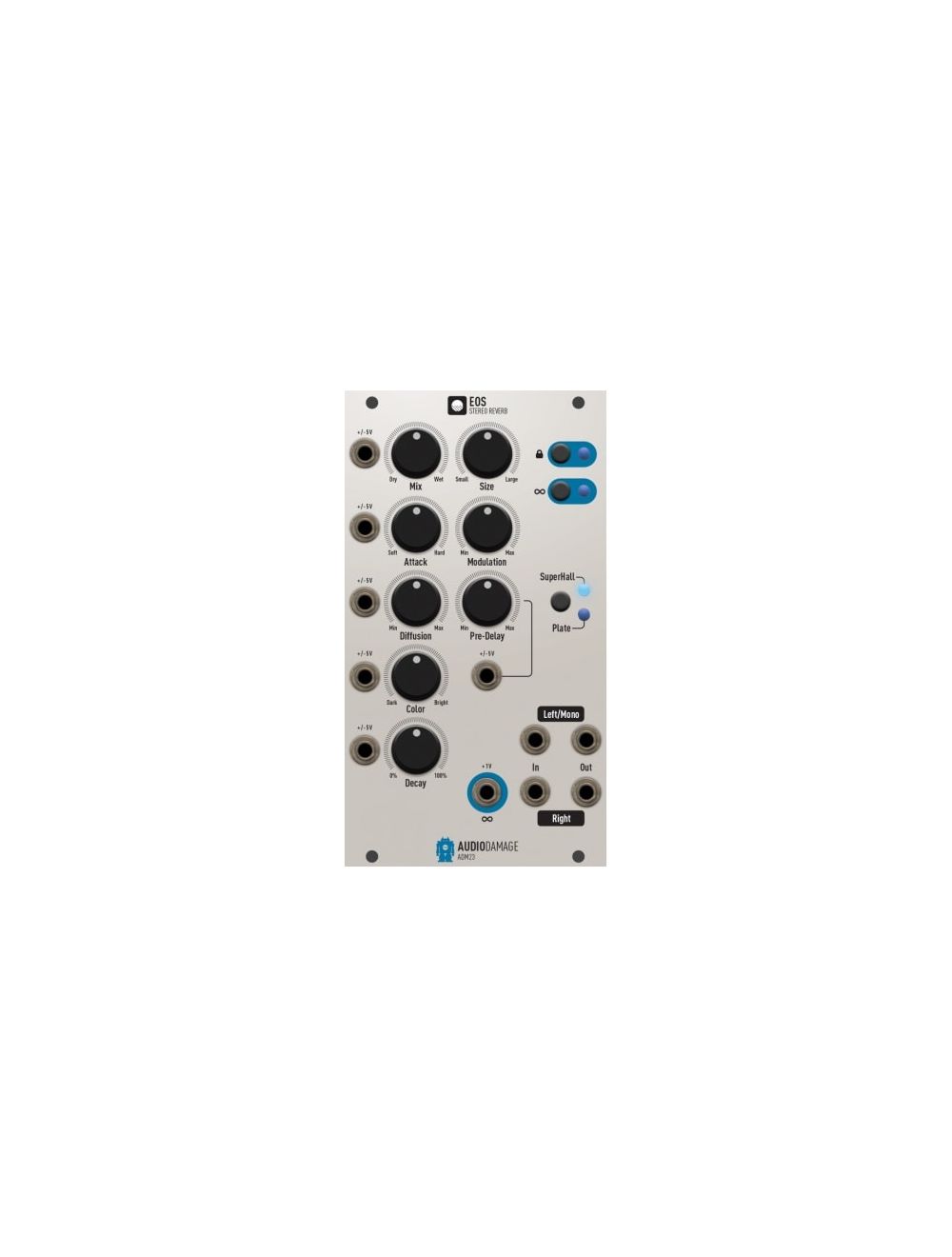 Audio Damage - Eos is a reverb that is digital if one looks at its DNA but in fact it does have an analog mind and soul. Audio Damage has resurrected its classic reverb algorhythm in the eurorack format

Audio Damage - Eos is a reverb that is digital if one looks at its DNA but in fact it does have an analog mind and soul. Audio Damage has resurrected its classic reverb algorhythm in the eurorack format

A long-time favorite of Audio Damage-plug-in users, the Eos reverb is now available in Eurorack! This module is code-identical to the Eos plug-in, with the Superhall and Plate algorithms made famous in the original.  With an easy-to-understand interface, and a 48k/24 bit true stereo audio path, Eos is a top-of-the-line commercial studio quality reverb for your Eurorack system.

The Plate algorithm in Eos is an unique implementation of the traditional digital plate, rich and full, perfect for drum and vocal simulation. The Superhall algorithm is designed to emulate the incredibly long, chorusy reverb tails heard on Harold Budd/Brian Eno records, and is what makes Eos amazing on synth sounds.

Attack - This controls the presence of the initial early reflections. At full anti-clockwise, the reflections are more or less equal. At full clockwise, an exponential decay occurs, with the initial reflection being much louder. This results in a more percussive and rich reverb tail.

Color - This is an omnibus control for the several EQ parameters in the algorithm. At full anti-clockwise, the reverb tail will be very dark, and have no high end, and at full clockwise, it will be very bright, and have no low end. In the middle, no EQ is applied.

Decay - This is the decay time of the reverb tail (called "RT60" in the 'verb business.) At full anti-clockwise, you will hear almost no tail, and at full clockwise, the RT60 (or time to -60dB) will be over a minute long in Superhall mode, and about 45 seconds in Plate mode with Size at maximum.

Size - This controls the physical size of the simulated hall or plate. Together with the Decay control, this describes the personality of the reverb. Note that this control has no modulation input, and you will experience some noise bursts if you adjust it while there is audio circulating in the reverb tank. This is unavoidable, as the control changes the times of over a dozen delays.

Modulation - This controls the amount of modulation applied to the delays in the reverb tank. In effect, it is a chorus control. It is a subtle control, and only really apparent with a long decay. At full anti-clockwise, the reverb tail will be icy and clean, while at full clockwise, it will be rich and full.

Pre-Delay - This controls the amount of time between when the original signal is heard, and when the signal enters the reverb tank. The response is somewhat different depending on the mode; in Plate mode, the first early reflection will occur at the set time, and so on. In Superhall mode, this effectively controls the "spread" of the early reflections.

Algorithm - This button switches between Superhall and Plate mode.

Panel Memory - The Algorithm and Lock buttons remember their state. Once you make a selection, the value is written to EEPROM memory after 30 seconds. If the module loses power before 30 seconds, it will not remember the selection, and will revert to the previous saved state.

I/O - Eos has a 48kHz sample rate at 24 bits, with 32-bit floating point internal operation. The I/O is true stereo, and changes internal routing based on what is plugged in. For mono use, just use the left side I/O. For mono to stereo (the normal configuration as a send effect), use the left input and both outputs. The internal DSP will route itself accordingly.

Mechanical Info - Eos has a 125ma current draw on the +12V rail, approximately 10ma on the -12V rail. It has an on-board regulator, and does not require +5V. It is 14HP in width, and has a depth of 25mm. It has a USB port on the backplane for firmware updates.