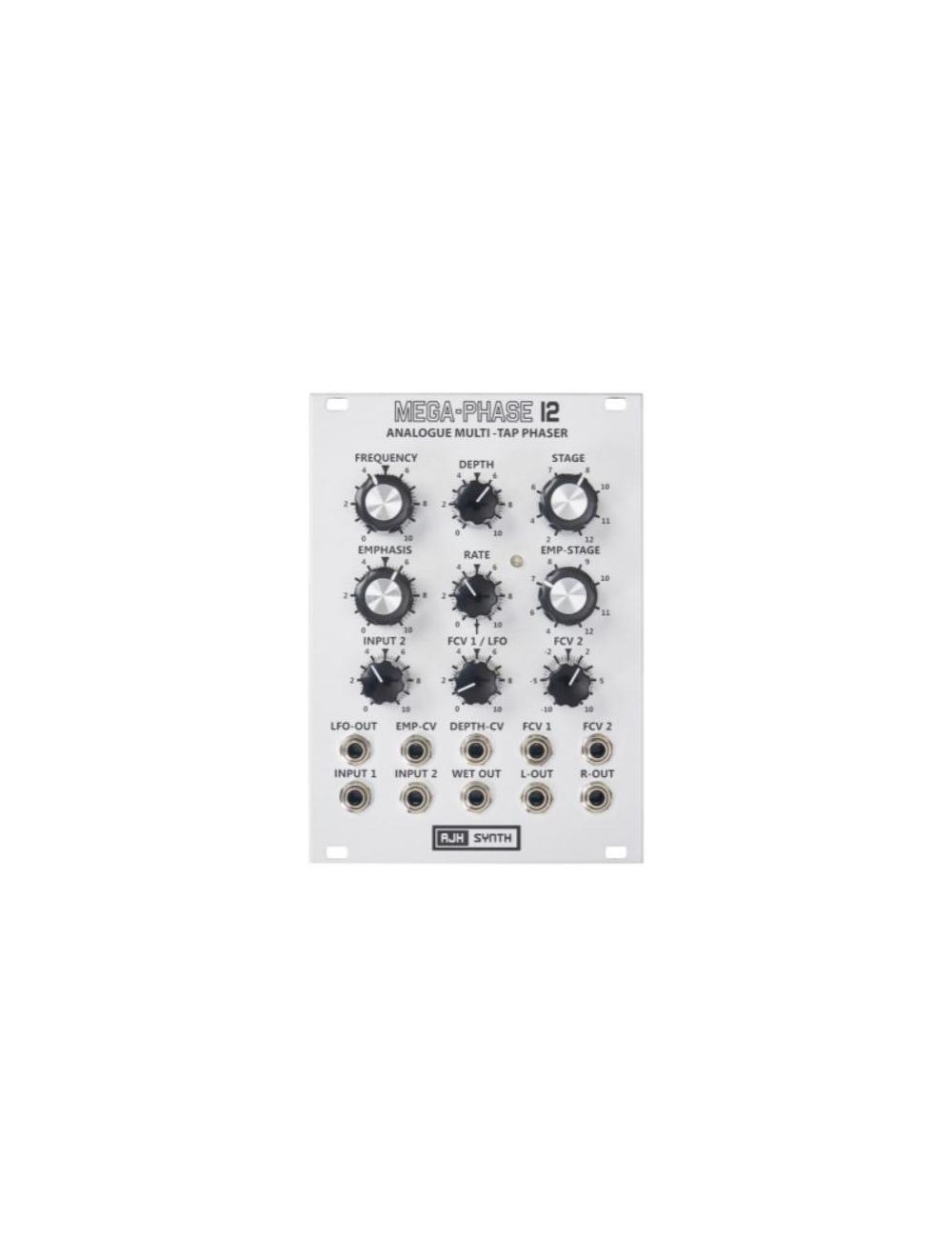 Be the first to review this product
The Mega-Phase 12 Multi-Tap Phaser module:
€388.04 €323.37
Availability: Out of stock
SKU
AJHSyMePh12Si
Add to Wish List Add to Compare
Details

A beautiful sounding phaser based on the original vintage EH "SmallStone" phaser guitar effects pedal. It has been expanded from 4 to 12 stages, with unique switching which allows stages to be individually selected for both the Output and Resonance return paths.

It can be used in Mono IN, Mono Out mode or Mono IN, Stereo OUT mode, with the Stereo outputs taken from the Stage and Emphasis paths rather than the more usual inverted signal only method. We have added CV voltage control of Phasing depth and Emphasis (Resonance) levels, so that these can be fully controlled from other Eurorack modules or external voltage sources.

In addition to a manual Frequency control it includes two separate Frequency CV inputs; FCV1 and FCV 2, and the latter includes an attenuverter function. An inbuilt, wide ranging LFO is normalised to FCV 1 input, and the LFO has its own external output too.

Unique "Wet" output and second Input with level control, which allow external effects to be patched into the Emphasis loop to create a second Emphasis path.

The AJH Synth Mega-Phase 12 is an all analogue Eurorack format vintage style phaser based on the vintage "Smallstone" Phaser circuit, but expanded to twelve stages, which allows much more complex phasing than the original four stage design, it also includes switchable Output stages and Emphasis stages for a huge variety of phaser sounds.

Usually a phaser only offers one type of phaser sound, which is determined by the topology of the phaser circuit used. However, we have taken the vintage Smallstone phaser, which was a four stage phaser effects pedal for guitarists and expanded it so that it can now be up to 12 stages, and a different stage can be selected for the Emphasis path, which allow manx different sets of phase cancellation to be explored, so rather than just having a single, "fixed" phaser sound a wide range of different sounds are available. We have also modified the Emphasis circuit so that much deeper, more extreme levels of resonance are possible giving an even wider range of possible sounds, and now in stereo too!.

The Smallstone phaser was famously used on synthesisers (rather than guitar) by Jean Michel Jarre on several of his early albums, and of course all of these sounds can be readily reproduced by the Mega-Phase 12, simply by switching the Stage and Emp-Stage switches to stage 4.

A wide ranging, triangle wave LFO is included, which has an amplitude of 10v p/p, along with a bi-colour LED that shows positive and negatived excursions of the LFO Waveform. The LFO has an external front panel output too, so that it can also be used as an external LFO with other Eurorack modules if desired. The output of the LFO is normalised to the FCV 1 Input, so that LFO modulation can be applied to the phaser core frequency simply by turning the FCV 1/LFO knob clockwise. However, an external modulation source can be used instead of the internal LFO simply by patching it in to the FCV 1 jack so that it defeats the internal normalising.

Manual Control of Frequency is with Freqency control knob, and there is also a second Frequency CV, input FCV 2, and its associated FCV 2 level control; however the FCV 2 control is an attenuverter rather than a regular level control. This means that in the centre (approx 12 o'clock) position, none of the modulation voltage patched to the FCV 2 input will affect the cut off frequency of the filter, however as the FCV 2 control is turned clockwise from centre then the voltage or waveform applied to the FCV 2 input will increasingly affect filter frequency. If the control is turned anti-clockwise from centre then an INVERTED voltage or waveform is applied to the filter cut off frequency. This is much more useful tha a regular level control, as it combines both level control and inverter in one convenient control.This invert function is also very useful if combining two Mega-Phase 12 units for true stereo imaging, the output of the LFO on Megaphase 1 would be fed to the FCV 2 Input and the FCV 2 attenuverter control then turned counter clockwise to invert the incoming LFO signal - in this case the FCV 1 pot on the "slave" MegaPhase 12 should be turned to zero as the "master" MegaPhase 12 LFO is providing all of the modulation.. This would cause one phaser to sweep "up" while the other is sweeping "down" which creases a superb stereo image, particularly when listening on headphones.

FCV1, FCV 2 and the manual frequency control can all be used simultaniously to create some very complex modulations and phase sweeps.

A phaser module is similar to a chorus module, in that the phasing sound is actually a 50/50 mix of the original "dry" signal and the "wet" treated phasing signal, this is required so that the "wet" signal has something to be out of phase against. However, we have added the "wet" only signal as an output too, so that this can be passed through an external effect such as EQ, reverb, flanger etc and then fed back into the Mega-Phase 12 using Input 2, and the feedback level in this configuration can be controlled with the Input 2 level control. This allows a second feedback path which can be used on its own or in conjuction with the Emphasis loop, to create a whole new range of sounds.