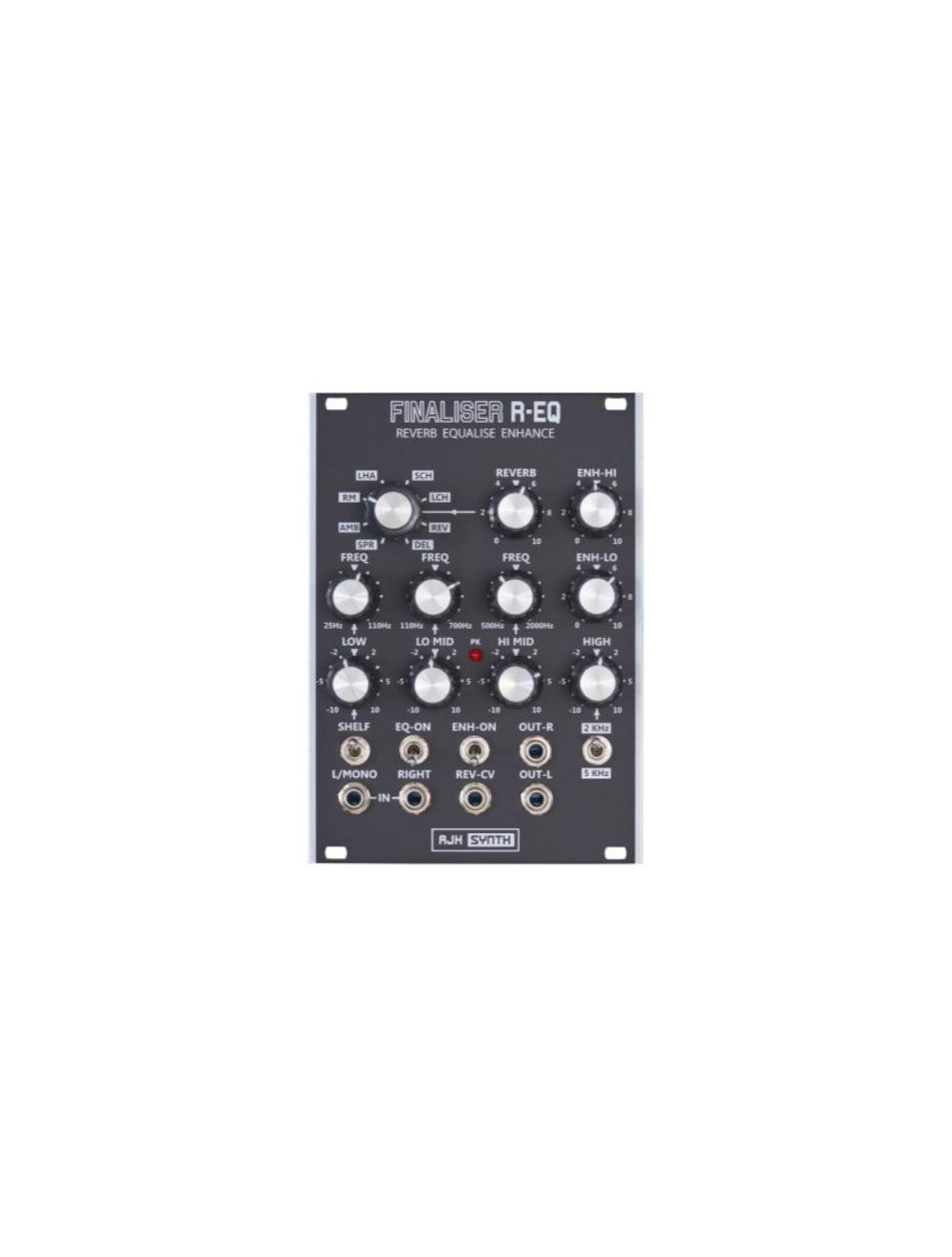 Be the first to review this product
The Finaliser R-EQ Reverb, EQ and Maximiser module:
€409.20
Availability: Out of stock
SKU
ajhSyFiBl
Add to Wish List Add to Compare
Details

Perfect for adding that final touch to a modular patch, the AJHSynth Finaliser R-EQ module includes seven Mono / Stereo reverb types, along with a four band equaliser and a Sonic Maximiser / Enhancer.

The Maximiser is a fully analogue circuit too, with low and high treatment bands which change the phase and amplitude relationships of the sound to add punch and harmonics and really bring the sound to life in the mix.

The Reverb engine is based on 20 year old DSP technology, harking back to the reverb units which were used extensively on many synth and EDM tracks a couple of decades ago. We have added full control of reverb wet / dry mix, either manually or under CV control.

The AJH Synth Finaliser R-EQ comprises three separate sub modules that are perfect for adding that final touch to a modular synth patch.The REVERB section is an "old school" DSP reverb with seven reverb types, along with a fixed time delay function. The EQUALISER section is fully analogue with three parametic EQ's, Bass Selving and two ranges of igh frequency shelving. The ENHANCER section is an analogue, two band Maximiser / Enhancer circuit which alters the time and amplitude of signals to add punch, depth and brightness to a mix.

The Equaliser section is fully analogue, based on inductor gyrator type circuitry. It features three parametric Equalisers with a massive +/-24 dB range, with variable Q - which increases with frequency gain / attenuation. The Parametic EQ bands cover the following ranges: LOW Band 25Hz to 110Hz, LO-MID Band 110Hz to 700Hz, and HI-MID Band 500Hz to 2kHz. The LOW Band also has a switch to select between peak and shelving EQ profiles. There is a fourth HIGH band, which again gives +/-24 dB of gain, and this has switchable 2kHz or 5 kHz Shelving. The EQ section can be bypassed with the EQ-On switch, so it is quick and easy to hear the effect of the EQ profile compared to the untreated signal. The equaliser section is a Mono effect and works on the L/MONO Input only.

The Enhancer / Maximiser section is a fully analogue circuit which adjusts the phase / time shifting and amplitude on the treated signal to change the levels of fundamental and harmonics. The Enhancer / Maximiser was originally designed to correct phase and amplitude distortion in speaker systems, so that the resultant sound would more accurately recreate the source sound and correct for the time distortions introduced by speaker systems. However, they can and do go beyond the original brief and are often used as a creative effect to deliberately add punch, bite and extra clarity to source sounds. The ENH-Lo covers the lower band and the ENH-HI the higher bands, they are different from regular tone controls and EQ because, rather than just boost or attenuate particular frequency bands they are a very useful "finalising" tool. The ENH-ON toggle switch is a bypass switch, so again it is very easy to have an a/b comparison against the untreated source sound. The Enhancer / Maximiser section of the Finaliser R-EQ is downstream of the equaliser section, so if the EQ and Enhancer are selected then the eq treated signal is fed to the Enhancer/Maximiser input..

Keep it simple was the philosophy we adopted with the reverb, no hunting through sub menus and tweaking hundreds of parameters, just seven switchable reverb types that can be selected using a rotary switch. Choose from Spring, Ambience, Room, Large Hall, Small Concert Hall, Large Concert Hall and Reverse profiles, along with a fixed time Delay setting. Very easy control of the wet / dry mix too - either manually with the reverb control knob, or by using a CV voltage patched into the REV-CV Input, in which case the Reverb control becomes an attenuator for this control voltage, so that it can accomodate a wider range of control voltages. With the reverb control fully clockwise a 0 to +5V control voltage range will give full wet/dry control. The Reverb is the final module in the chain, so if the EQ and Enhancer / Maximiser are both switched in the signal flow on the L/Mono channel is EQ - ENH - Reverb.

The reverb can also be used as a Stereo IN / Stereo out effect by using the L/MONO and Right inputs. The EQ and Enhancer can still be used here, however they will only affect the L/Mono channel, the RIGHT channel will be reverb only.