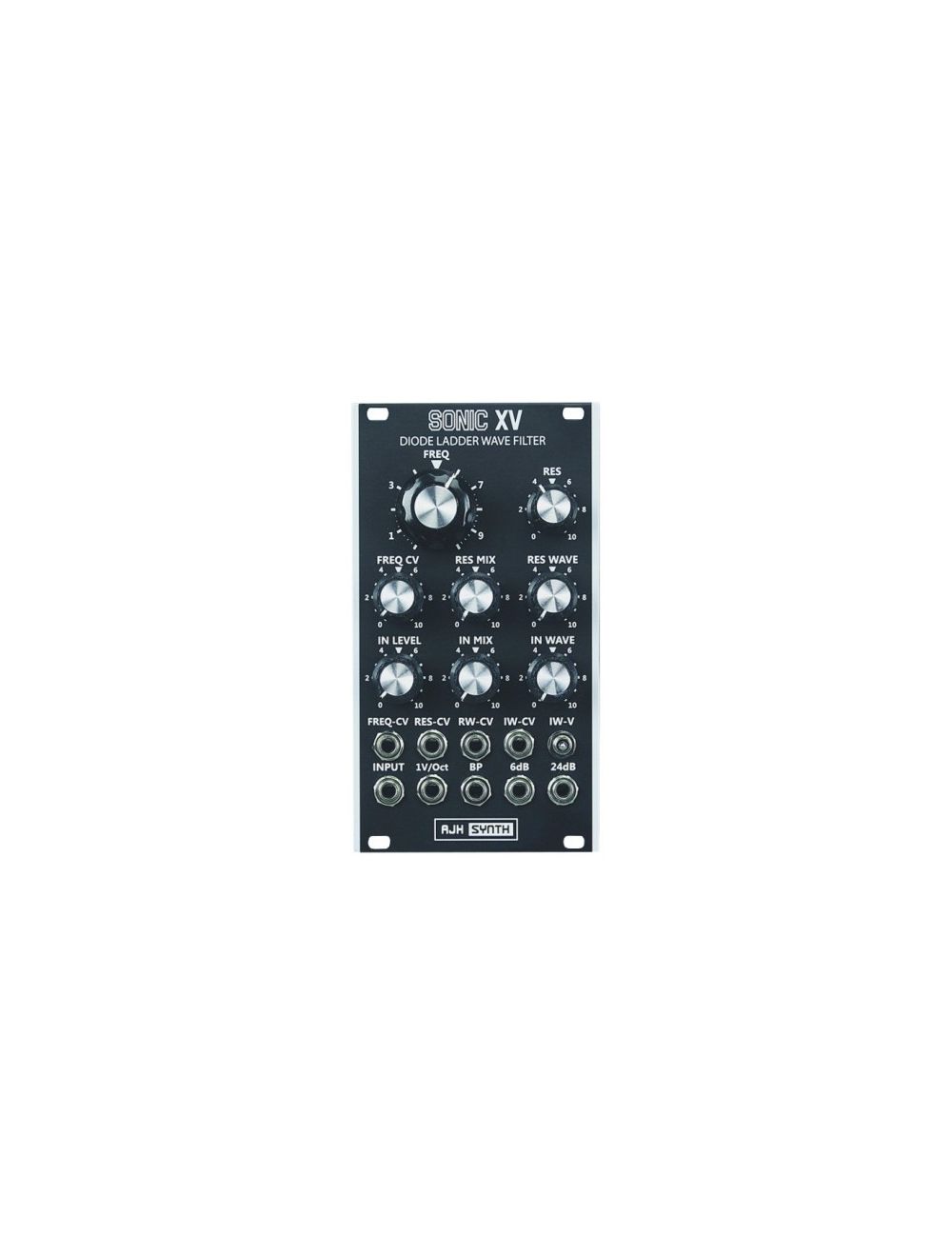 Be the first to review this product
The AJH - ÿSonic XV is another long-forgotten recreation of a sound-processing module. If you desire some truly sweet yet still great analog fatness for any audio signal, this module will be your instant favourite. As with all other AJH Synth modules, the controls are just right where you need them, and they offer you a high-quality grab.
€292.80
Availability: Out of stock
SKU
ajhsxvcf
Add to Wish List Add to Compare
Details

The AJH - ÿSonic XV is another long-forgotten recreation of a sound-processing module. If you desire some truly sweet yet still great analog fatness for any audio signal, this module will be your instant favourite. As with all other AJH Synth modules, the controls are just right where you need them, and they offer you a high-quality grab.

The AJH - Sonic XV Eurorack module is a four pole Diode Ladder Filter, featuring the circuitry and sound of the Musonics Sonic V synthesiser, which has a quite different character from transistor ladder filters. In addition to the regular 24dB Low Pass output we have added a 6dB Low Pass output and a Bandpass output, along with full voltage control of the resonance.

Two waveshapers have been added to hugely increase the sonic versatility of this module. There is a breakpoint based wavefolder on the input, with drive level that can be manually adjusted or voltage contolled. A bias control switch allows extra waveshape variations.

These additions take the diode ladder fllter core way beyond it’s original function, it becomes a “filter” module that can add harmonics and shape waveforms rather than simply filtering them. With four independant CV inputs very complex filtering and waveshaping sounds become possible.

It has a different character to the AJH MiniMod transistor ladder filter, sonically it is nearer to the Roland 303 and EMS Synthi A, but with it's own take on the diode ladder sound.

We have added many features which make the Sonic XV one of the most veratile Eurorack Modular filters currently available, and with the waveshaping features it can go way beyond traditional subtractive filtering.

The original Sonic V Diode Ladder Filter core was a simple 24dB (four pole) low pass filter, we have added extra outputs so that the Sonic XV features additional 6dB (one pole) Low pass output and a Band Pass Output. Also,like other 24dB filters, due to phase cancellation the output level of the 24dB output would drop considerably as resonance was added - we have added a level correction circuit to the 24dB output that considerably reduces this effect and makes the filter rather more usable at higher resonance levels. We have also added external voltage contol of resonance with the RES-CV input.

The RES control manually regulates the amount of internal feedback applied to the filter core. At high levels of feedback (between positions 8 and 10) the filter will self-oscillate and produce a sinewave output without any audio input, however the filter will only self resonate at higher frequencies (2KHz and above) unless the Resonance Waveshaper is used, in which case the self resonant level can be extended down to around 150 Hz. When the resonance waveshaping is used the resonance waveform is no longer a sine wave, the exact waveform depends upon the various Resonance control settings.

If a control voltage is patched to the 1 V/Oct input when the filter is self resonating, the resonance wave can be played in the same manner as a VCO with a tracking range of 3 - 4 octaves. The CV scaling is not temperature corrected so it may drift with changes in ambient temperature. Please also note that the tracking scale changes if the Resonance Waveshaper is used, by default the scaling is calibrated for waveshaped Resonance.

Using the filter without waveshaping

The filter can be easily used without any waveshaping by simply rotating the IN MIX and RES MIX controls to zero (fully anticlockwise) In this configuration the Sonic XV filter performs as a regular resonant VCF, with 24dB Low pass, 6dB Low pass and Band Pass outputs.

The Sonic XV includes two waveshapers to add harmonics and distortion to both the pre filtered input signal and the resonance loop return signal. The illustration below gives a visual indication of how the various component parts of the Sonic XV filter are interconnected.

The audio signal path is shown in purple. An audio signal is patched into the Audio Input, and the signal level is attenuated by the IN Level control. Next is the IN MIX control, this determines how much of the input signal is routed to the Input Waveshaper (the "wet" signal) against being fed directly to the filter cor (the "dry" signal). The input waveshaper is a six stage diode alternate breakpoint wavefolder which is placed before the filter core. The output of this waveshaper can be mixed with the "dry" input signal in any amount from 0 to 100% using the IN MIX wet/dry blend control. The drive level of the wavefolder can be manually adjusted with the IN WAVE control, or by patching a control or modulation voltage into the IW-CV jack, it can be voltage controlled. There is also a three position bias control switch that allows additional variation to the input waveshaping. Green trace is Input waveform, Yellow trace is the waveform from the 24dB Output. (Freq. Cutoff at 10, all resonance controls at zero) Green trace is Input waveform, Yellow trace is the waveform from the 24dB Output. (Freq. Cutoff at 10, all resonance controls at zero)

The Resonance waveshaper is an overdrive waveshaper which is placed in the resonance loop of the filter, so obviously it is only effective when filter resonance is added to a sound. The output of this waveshaper can be mixed with the "dry" resonance loop signal in any amount from 0 to 100% using the RES MIX wet/dry blend control. The drive level of the wavefolder can be manually adjusted with the RES WAVE control, or by patching a control or modulation voltage into the R W-CV jack, it can be voltage controlled. . Some Resonance WaveShaper example waveforms: The above examples give an idea of some of the waveshaping that can be expected from the Input and Resonance Waveshapers. Obviously combinations of both can be used, and as much or as little waveshaping as desired can be used with a particular input signal by adjusting the IN MIX and RES MIX controls. So a small amount can be mixed in just to add a little fatness and warmth, or large amounts can be used to create some very aggressive sounds that can be manipulated with external voltage control.