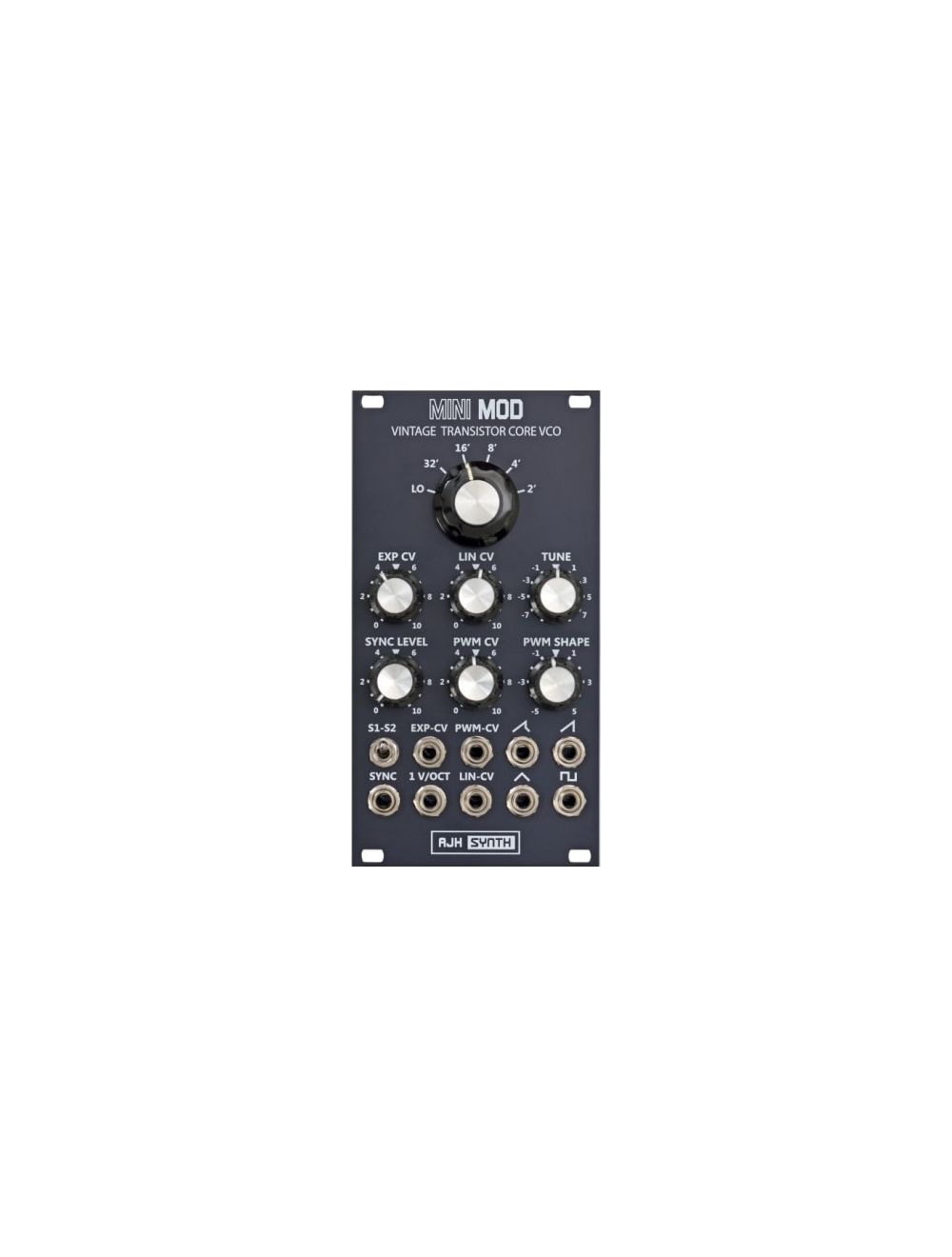 Be the first to review this product
The AJH Minimod - VCO is a true recreation of the Moog Model D's original VCO. The manufacturers were after each and every detail of the original, starting from the power supply... A true rebirth.
€274.80
Availability: Out of stock
SKU
ajhvco
Add to Wish List Add to Compare
Details

The AJH Minimod - VCO is a true recreation of the Moog Model D's original VCO. The manufacturers were after each and every detail of the original, starting from the power supply... A true rebirth.

The discrete transistor core of this Voltage Controlled Oscillator is an exact emulation of the original and now very rare R A Moog Model D Oscillator from 45 years ago, and the resulting waveforms and sounds are exactly as the original, as big, fat and sweet as ever!

The Square wave output now has fully adjustable Pulse Width Modulation, with manual and CV control rather than the more restricting selection of two static fixed pulse widths or square wave of the original design.

The manufacturers have added extra features too, including exponential and linear modulation inputs and two different types of oscillator sync which help to make this a very versatile Eurorack VCO in its own right.

When discussing the Model D oscillators, enthusiasts often refer to the “early” or “late” model VCO cards, however contrary to popular belief there were not two but three different types of oscillator cards fitted to the Model D during it's lifetime, comprising:

When the manufacturers decided to recreate the Model D in Eurorack format they tested, evaluated and built prototypes of all three VCO designs before settling upon the very early design, it just sounded slightly “sweeter” to their ears.

The very early oscillator cards were a fully discrete transistor design. Of the 17,000+ Model D’s produced less than 300 featured this oscillator. Early Model D’s fitted with this VCO card are the most highly prized of all Model D’s, and currently sport asking prices of up to US $15,000. Many Model D enthusiasts regard this as the sweetest sounding and fattest of the three VCO, however it was quickly discontinued and replaced with the 3046 design because the temperature stability was terrible and customers complained that it would not stay in tune! This was caused by a design problem in the CV summing amplifier circuitry, it was not fully temperature compensated and the pitch would drift due to heat from the power supply or changes in ambient conditions.

To address the original temperature stability issue the manufacturers have redesigned the Control Voltage summing amplifier front end of the VCO and upgraded it by using precision op-amps and voltage references which were unavailable back in the day when this oscillator was designed. This successfully addresses the temperature stability problem and the good news is that the modifications which they have made are to the voltage control element of the VCO only, they did not need to make any changes to the audio and wave shaping parts of the circuitry, so the resulting sounds and waveforms remain unchanged. The audio circuitry is still identical to the original and retains the PNP current source and PFET transistor voltage follower along with the fast switch dual transistor Schmidt trigger core, so that it retains all of the sonic characteristics of the original design. They have used identical resistor, capacitor values and transistor specifications and it remains true to the original in all ways except for temperature stability, which is now vastly improved.

All of the waveforms are available simultaneously from the relevant waveform output jack sockets and the overall frequency (pitch) of the waveforms is varied by applying a control voltage to the 1v/Oct, Exp-CV and Lin-CV inputs, all of which can be used simultaneously. A positive voltage will increase pitch and a negative voltage will lower it. Further pitch control is available with the Tune pot and the Octave switch.

This very early VCO design also signalled the first appearance of the famous “sharktooth” waveform in addition to the usual saw tooth, triangle and square waves.

The signal output from the original oscillator core is +/- 1.7V, which is considerably lower than the +/- 5V used in Eurorack modular synths. So, the manufacturers have added an output stage to each of the waveform outputs to bring the signals up to Eurorack modular levels. These output stages use pro audio grade operational ampifiers and have a measured total harmonic distortion of only 0.008% * and a very low noise floor, so it raises the signals up to modular levels without adversely affecting or colouring the sound.

The MiniMod VCO is fully integrated into Doepfer standard Eurocard format and uses the full 16 way power header, and is configured so that it receives the 1v/Oct input from the distribution bus by default. This can be overridden by connecting a patch lead to the 1v/oct input, this cancels the normalling from the distribution bus. If the other end of this patch lead is not connected to a control voltage then the oscillator will free run, in the same way as Model D when VCO 3 keyboard control is disabled.

The original Model D was powered by +/-10v supply rails, so the manufacturers have used exactly the same voltages for the MiniMod oscillator core. Eurorack power supply rails deliver +/-12v to modules, so they have included two onboard low ripple voltage regulators so that the VCO core operates at a very stable +/-10v. This design approach has the added advantage that it provides some isolation to each VCO from noise on the supply rails and prevents the VCO’s “locking” together when they are at or very near to the same frequency, which can sometimes be a problem with modular synth VCO’s – it would stop the slow beating together of the VCO’s which creates all of the multiple VCO “fatness” that we know and love.

The manufacturers have added several features which were not available on the original VCO’s. Firstly, instead of having a square wave and two fixed width pulse waves they have added fully variable pulse width, which can be varied from the front panel PWM width pot or can be modulated by a +/-5V control voltage, the depth of which can be controlled by the PWM CV pot. To emulate the Model D waveforms with the pulse width control position 0 is square wave, control knob position 3 is pulse 1 and position 5 is the narrower pulse 2.

The manufacturers have also added two types of oscillator sync. Because the oscillator core uses a transistor rather than the more usual FET switch to discharge the timing capacitor we can have regular sync which resets the timing pulse but they have included a second sync setting which uses the sawtooth wave instead of a short pulseto the reset transistor which can produce some interesting and rather different sync effects which are nearer to cross modulation. The Minimod VCO produces a rising ramp waveform, however some modular VCO's produce a falling ramp sawtooth wave rather than a rising ramp wave, if this is the case then the waveform would need to be fed through an inverter module first to be effective as an external sync source.

The VCO can be used as an LFO, there is a Lo setting on the octave switch for this and it acts in exactly the same fashion as the Model D VCO 3 except that it does not have the reverse ramp waveform which VCO 3 featured instead of Sharktooth. There wasn't space on the panel to add this feature, but if required this can be easily obtained by passing the sawtooth wave through an inverter. At low frequencies is actually a VC-LFO rather than a simple LFO, as the frequency can be varied by adding a control voltage to 1v/oct or exp CV inputs, and a negative voltage is acceptable. So, if you had lets say 1Hz with 1v applied to the V/oct input, then patching -1v to the 1v/oct input will drop the frequency to 0.25Hz, -2v will take it down to 0.125Hz and so on. It will go pretty low, with -5v to the 1V/Oct input it runs at around 0.02Hz, or one cycle every 50 seconds.