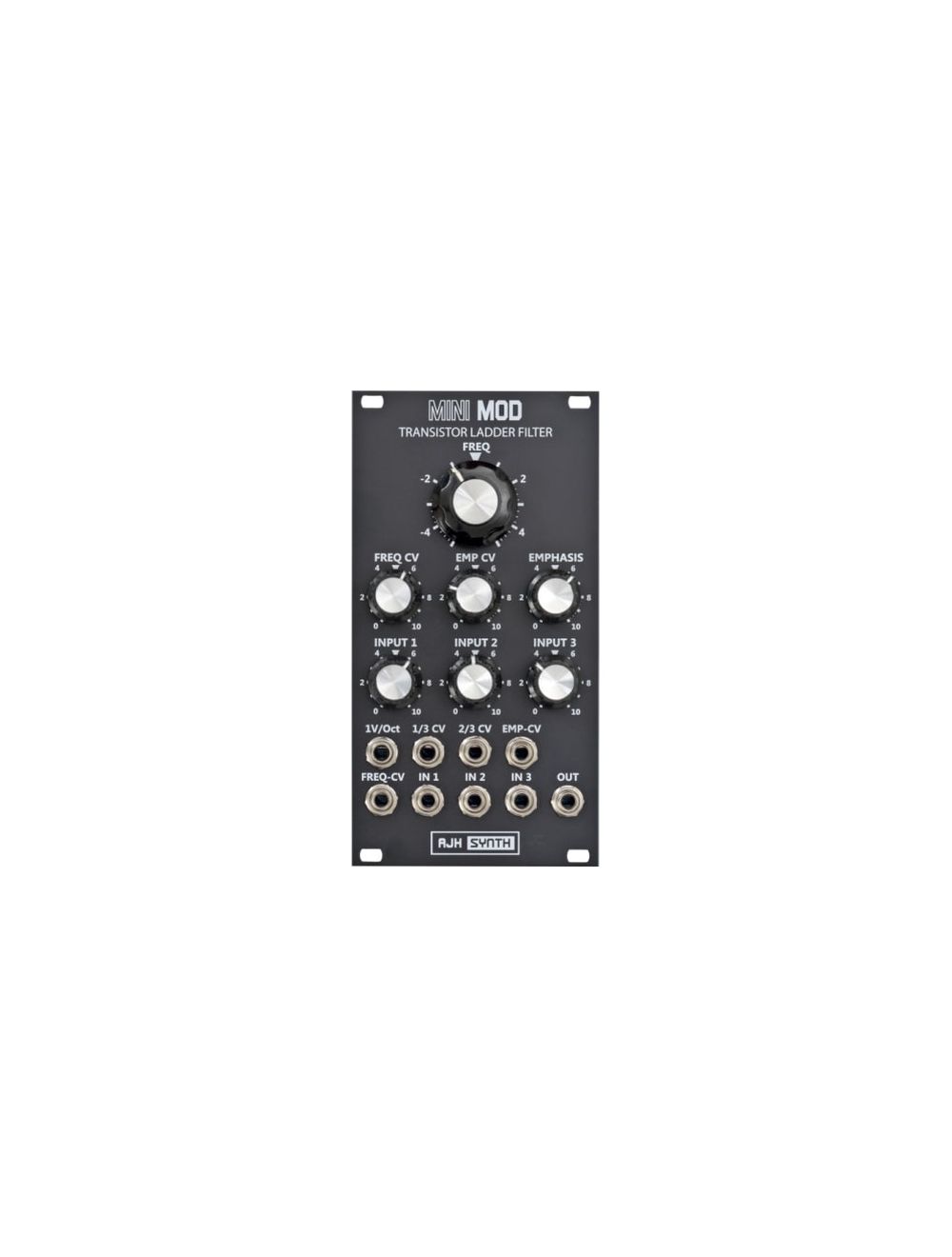 Be the first to review this product
AJH MiniMod - VCF - the filter of the Model D recreated in its entirety - including power supply voltages to get closest to what this now common-sense sound-processor was in the original Moog instrument.
€279.60
Availability: Out of stock
SKU
ajhvcf
Add to Wish List Add to Compare
Details

AJH MiniMod - VCF - the filter of the Model D recreated in its entirety - including power supply voltages to get closest to what this now common-sense sound-processor was in the original Moog instrument.

The stuff of legends, the Moog transistor ladder filter changed the face of the musical landscape forever. The MiniMod VCF is a faithful replica of the 24db/octave low pass filter used in the early Model D synthesiser.

There is a three channel input mixer and a nice large filter cutoff control, along with “1/3” and “2/3” CV inputs to emulate the action of the original VCF keyboard switches, apply 1v/oct to either of these inputs and the VCF keyboard tracking will be the same as the original with Keyboard 1 (1/3) or 2 (2/3) engaged, or use the 1v/oct input to emulate both switches selected. There is a variable Exponential CV input which is about 30% more sensitive than the 1v/oct input, this allows some nice over modulation effects.

The manufacturers have added Voltage Controlled Resonance (Emphasis) in addition to manual Emphasis control. This uses a vactrol as the control element. The fast vactrol used allows modulation speeds up into the audio range. The filter will of course self resonate and act as a sine wave oscillator too.

There is also an overdrive facility which can be selected with an onboard jumper. This allows the input to the filter core to be substantially overdriven, great for adding a bit of extra dirt to the sound.

The Moog transistor ladder filter is a 24db/octave slope low pass design which was patented by Dr Bob Moog on 28th October 1969. It has gone on to become possibly the most famous filter ever, and since the expiry of the patent it has also became the most cloned and copied filter in the world too. But not all ladder filter replicas are born equal......

The manufacturers initially thought that this would be an easy module to re-create, but it is only after considerable development work that they feel that they have now “nailed” the early ladder filter sound and captured its magic. They have taken great care to get as close to the original sound as possible, so we replicated the same circuitry and component values of the Early Model D VCF. In early incarnations of this filter all of the ladder transistors were hand matched pairs, whereas in the later filters only the top and bottom ladder pair were matched, presumably to save time and production cost as production volumes increased.

This change is cited as being responsible for the slightly better sound of the early Model D ladder filters, so in the AJH MiniMod VCF they use fully matched transistor pairs for all positions in the ladder.

The manufacturers found that filter core voltage is also important, so they run the filter core on the original +/-10volt supply voltages, obtained from the Eurorack +/-12v supply by the addition of two very low ripple linear voltage regulators. The core signal levels are also a factor in the sound; so the MiniMod VCF runs at exactly the same waveform signal levels as the original, which are considerably lower than those used in Eurorack modular synths. So, after the filter stage they have added an output stage to bring the signals back up to +/- 5V pp modular levels. This output stage uses a pro audio grade operational ampifier and has a measured total harmonic distortion of only 0.008% * and a very low noise floor, so it raises the signal back to modular levels without adversely affecting the sound.

It has taken four prototypes and involved the testing of many different transistor types and several circuit board layout changes to get to the point where they feel that they have now “nailed” the early Model D ladder filter sound and captured its magic. They found that transistor specification, supply voltage and internal signal levels make a considerable contribution to the Model D VCF sound. They were very surprised at how flat and lifeless the filter became when substituting different types of ladder transistors. The cut-off and resonance remained similar but the fast cut-off “three dimensional bong” sound of the filter was easily lost.

A vactrol based circuit adds a very useful Voltage Control capability to the filter Emphasis effect and the amount of voltage control applied can be varied with the EMP-CV contol knob. The vactrol is a purely resistive element similar to a potentiometer and is considerably less intrusive to the filter resonance feedback loop than the more common transconductance amplifier solution and has been chosen for that reason.The manufacturers have selected a fast acting vactrol, this allows maximum modulation speeds to reach well into the audio range. The manual Emphasis control uses a (hard to source!) antilog taper potentiometer of the same specification as the original, so it offers the same control response as the original design.

The manufacturers have also included a jumper on the circuit board, which when removed will double the gain to the front end of the filter. This substantially overdrives the filter core and is great for adding a bit of extra dirt to the sound but at the cost of some subtlety. Simply re-connect the jumper to return the gain at original levels.