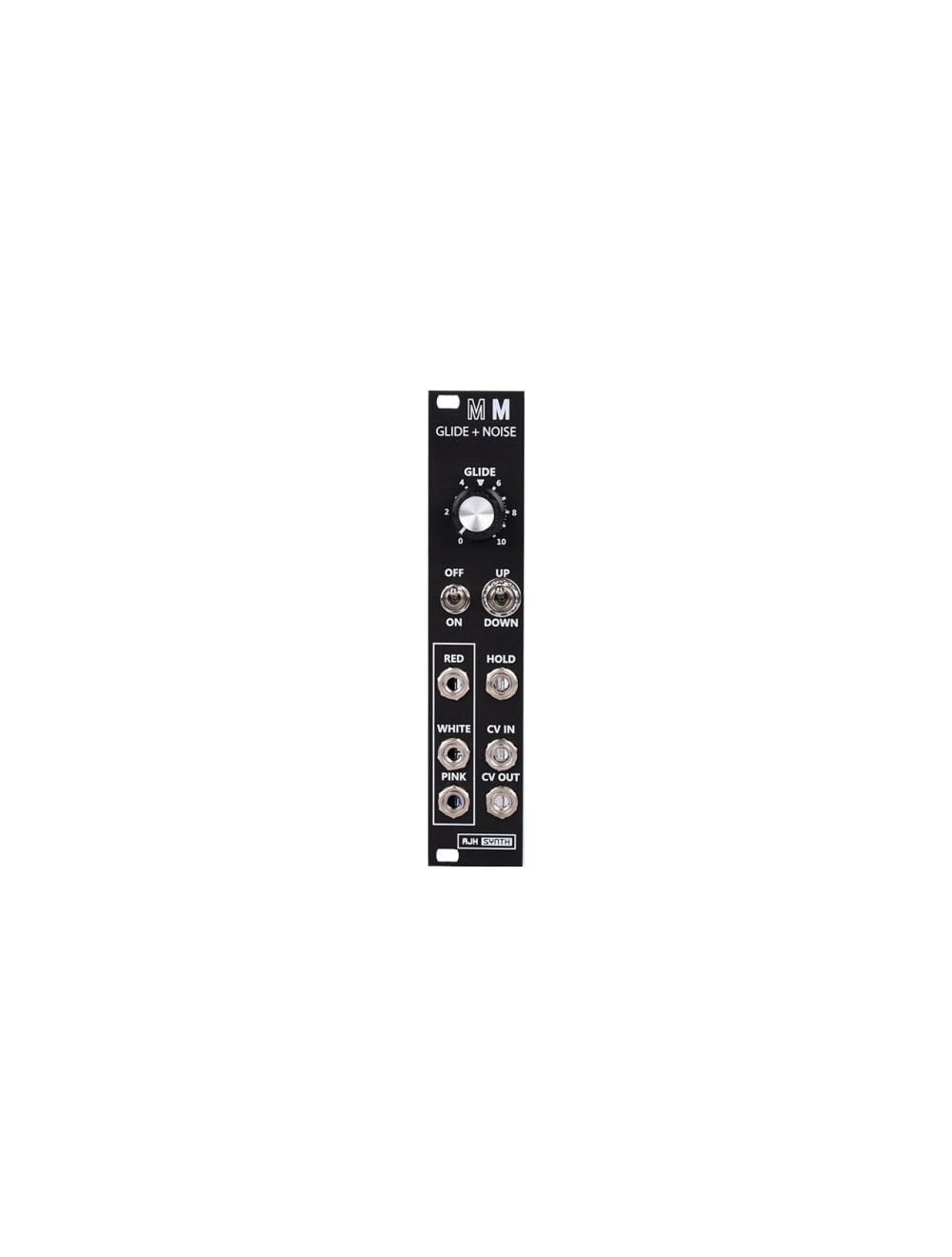 Be the first to review this product
The AJH MINIMOD - GLIDE & NOISE is exactly the same glide character that the Minimoog Model D had. Exactly. The analog noise generator circuitry is also something that does not lack vintage authenticity.
€192.00
Availability: In stock
SKU
ajhgnn
Add to Wish List Add to Compare
AJH MiniMod - Glide & Noise is available to buy in increments of 1
Details

The AJH MINIMOD - GLIDE & NOISE is exactly the same glide character that the Minimoog Model D had. Exactly. The analog noise generator circuitry is also something that does not lack vintage authenticity.

There is a lot of power and funtion contained within this deceptively small 6hp module. It features both the Glide and the Noise generator circuitry from the vintage Model D synthesiser. The MiniMod glide uses a discrete dual fet circuit which includes a hold function that can gate the glide effect. Glide is only active when the Hold CV input is high, so if the hold input is connected to the gate output of a Midi/CV convertor then the glide will be active only while the key is actually depressed, emulating the exact behaviour of the original Model D synthesiser. The manufacturers have also increased the versatility of the module by adding Glide Up only and Glide Down only modes in addition to the standard Glide Up & Down mode of the original circuit. The Noise Generator is completely separate from the Glide circuitry. There are three outputs offering White Noise, Pink Noise and Red Noise. The noise source itself is all analogue and uses a specially selected transistor in avalanche mode which is amplified and filtered by discrete transistor based circuitry. Module Width: 6hp Module Depth: 54mm Current Usage: 35mA Positive, 35mA Negative In Depth The manufacturers originally thought that any generic glide/slew module would be able to produce the famous Model D style portamento effect. So the manufacturers tried using a standard R/C based Slew module, which produces an exponential glide slope as shown (in purple) on the graph below. The problem here is that the pitch does not rise or fall evenly, and because of this it sounds nothing like the effect from a vintage Model D. So, the manufacturers set about reproducing the original glide circuitry and the resulting glide slope is shown (in green) on the graph below

At a quick glance the rise and fall slopes appear to be straight lines but this is not true and it is not a perfectly integrated slope, it still has a slight exponential curve on both the rising and falling slopes. The second point to note is that the glide slope is asymmetric – it glides up considerably faster than it glides down. These two factors contributed considerably to the original sound, so the manufacturers have replicated the module by using exactly the same dual FET transistor circuitry as the original. An issue with the original circuit is that it only works over a range of around 4 octaves, however by careful tweeking the manufacturers have extended the range to over 5 octaves.

The Hold behaviour Originally the glide circuit was part of the keyboard controller and the glide effect was only active while one or more keys were depressed, as soon as all keys were released the hold circuit came into effect and held the CV voltage at a constant level and disabled the glide. This state was held until there was another key press, upon which the glide effect resumed. This can be seen in the following graph which demonstrates the hold on/off effect on a slowly rising pitch CV voltage:

In the above illustration we start by pressing the C4 key ( to give 4volts CV In), then we release this key and immediately press the C5 key (5volts CV In)and then we release and then re-press the C5 key twice. The yellow trace represents the gate which is high when the key is depressed and off when the key is released. The green trace represents the Pitch Control Voltage. We can see that the oscillator pitch will only raise while the key is depressed (gate signal present). It will hold the voltage at a constant level when the key is released (gate signal not present) despite the fact that Glide is switched on. The manufacturers have replicated this behaviour on the MiniMod Glide by having a gate input which can be connected to the gate output of Midi/CV convertor (or any other gate/trigger signal) to control this effect. If nothing is plugged in to the gate jack then the input is normalled so that the glide is permanently active. Gate voltages of up to 12volts are permissable, the hold will go high on any input gate voltage between 3 volts and 12 volts. Three Glide Modes The manufacturers have added a very useful extra feature which was not available on the Model D – we can select Glide up only, Glide down only or both. So, for example in “glide up” mode, if you play a higher note then the sound will glide to that note at a speed determined by the glide control, but if you play a lower note the sound will disregard the glide setting and jump immediately to the lower note. The opposite effect is available in “glide down” mode. These modes are available in addition to the existing glide mode which is selected whith the switch in its centre position. Noise module White Noise, Pink Noise and Red Noise are simultaniously available from their respective outputs. The White and Pink noise can be used as both audio or random CV signal sources, whereas the Red noise is mostly at sub audio frequencies and is commonly used as a random CV voltage source. The noise source itself is all analogue and uses a specially selected transistor in avalanche mode which is amplified and then filtered by discrete transistor based circuitry. The manufacturers carefully select the npn transistor that they use as a noise source by measurement and analysis using a 24bit Audio range Spectrum analyser, this method allows us to select transistors with exactly the same noise signature as the original.