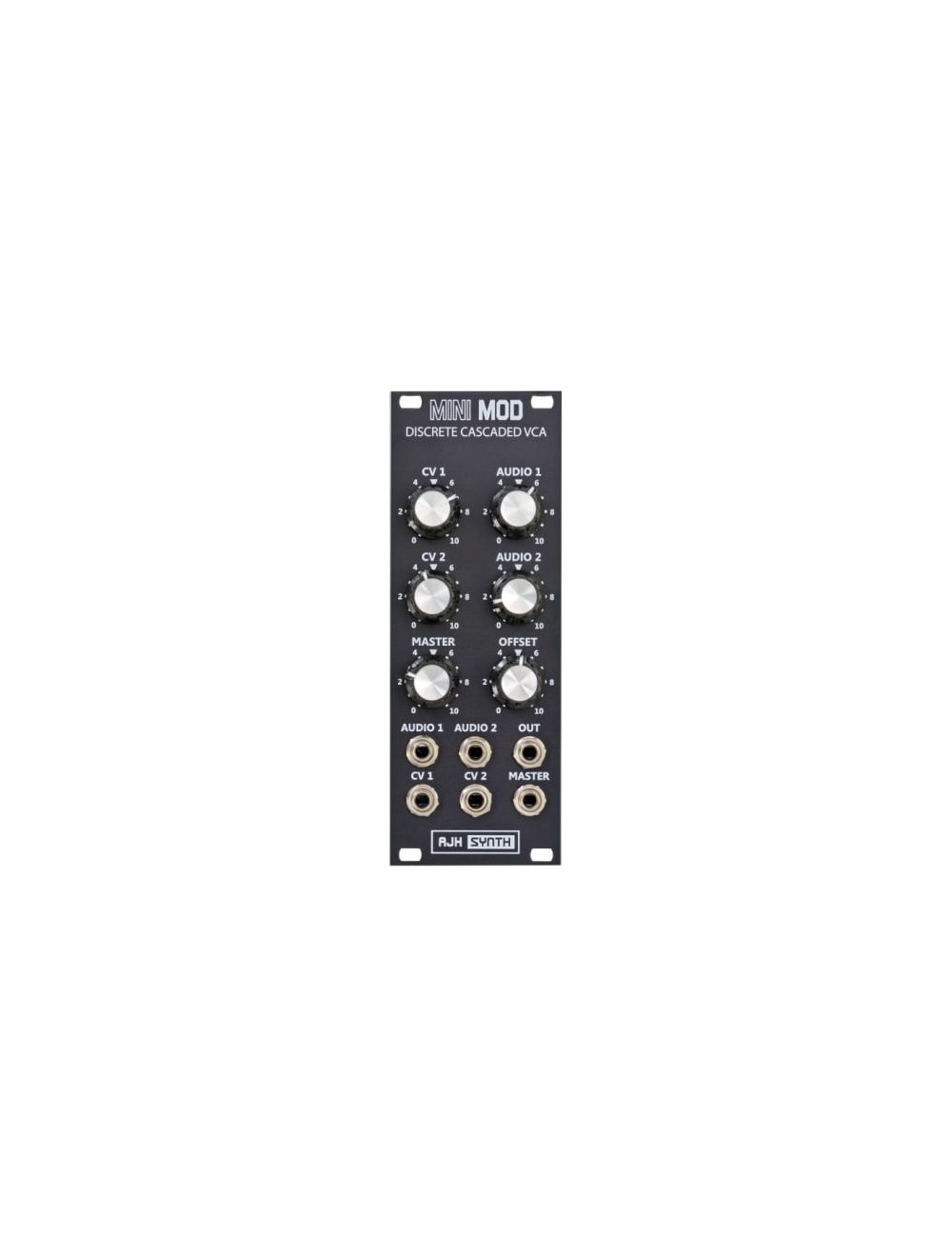 Be the first to review this product
AJH MiniMod - Discrete Cascaded VCA is a truly faithful, scientifically fine-tuned and tailor-made into eurorack environment while preserving the originality of the Model D sound.
€180.00
Availability: Out of stock
SKU
ajhdcvca
Add to Wish List Add to Compare
Details

AJH MiniMod - Discrete Cascaded VCA is a truly faithful, scientifically fine-tuned and tailor-made into eurorack environment while preserving the originality of the Model D sound.

There are two audio inputs each with their own level controls along with two CV inputs which control the gain of VCA 1 and a Master CV input and level control which controls the gain of VCA 2. There is also an offset control so that a preset gain can be added to VCA 1. Internally it operates at the same voltage and signal levels as the early Model D voltage controlled amplifier and the output of VCA 1 is hardwired to the input of VCA 2.

A high gain (overdrive) mode can be selected for VCA 1 with an onboard jumper, this overdrives it into soft clipping and in this mode the second VCA can be used in a similar way to the Master volume on a guitar amplifier so that variable levels of distortion (or "grit") can be added to the sound.

The original Model D synthesiser had not one, but two VCA’s. Both VCA’s were fully discrete transistor differential amplifier designs using matched transistors and they were hard wired in series. The output level of the first VCA was controlled by the Control Voltage from the Loudness Contour generator, whereas the level of the second VCA was set by the Control Voltage from the external pedal. If the pedal was not present then it was normalised to full volume, so without the pedal input the second VCA preset to maximum (unity) gain.

In order to keep as closely as possible to the original sound and functionality the MiniMod VCA cores operate at the same internal supply voltages as the Model D, this is generated from two onboard low ripple voltage regulators which drop the +/- 12v Eurorack power supply rails to the correct +/-10V internal voltages. It connects to a standard Eurorack power bus using the supplied 10 way to 16 way header cable. The relationship between the various inputs and controls to the dual series VCA's is illustrated below. When no CV voltage is plugged into the Master CV socket then the internal switch in the jack socket control automatically connects it internally to +10V, and therefore the Master Volume control works in the same way as the external pedal on the Model D synthesiser. However, the manufacturers have increased the sensitivity of the Master CV input, so that overmodulation effects are possible when using an external CV signal to the Master CV jack, and the level of the external signal is controlled by the Master control knob.

One interesting effect is to route the same CV signal patched to both the CV1 jack socket and the Master jack socket (by using a single to dual patch cable or an external multiple). This gives an accenuated exponential response as both VCA's are cascaded.

The basic VCA design is not particularly high fidelity and has a usual distortion figure of around 1%, however the manufacturers have added a jumper to the circuit board which can be used to considerably increase the distortion to up to 20% depending on the CV voltages applied an/or the settings of the Offset and Master control knobs and this can add a lot of "grit" to the resulting sound..

The oscilloscope screen capture below (Fig 1) shows the effect on the distortion on sine wave with the jumper in place to be less than 1% (top trace) and with the jumper removed it can rise to up to 20% (bottom trace). The level of distortion is primarily controlled by the setting of the Audio 1 and Audio 2 inputs, turn these to maximum and control the output with Master Pot. Fig 1. Effect of onboard jumper on output distortion

Below in (Fig 2.) we can see the distortion measurement and audio spectrum analysis of the distortion on a 1khz sine wave. The expected odd harmonic clipping at 3khz, 5khz, 7khz etc is present but there is also some lower level even harmonic distortion at 2khz, 4khz, 6khz etc which is the type of distortion prevalent in valve (tube) amplifiers. Below is a patch chart showing one of the manufacturers' favourite ways to use the Cascaded VCA. We add a multiple to split the CV from Output 2 of the Contour Generator and feed it to both the CV 1 and Master Inputs of the VCA, this controls both of the VCA's with the same Control voltage and gives even more "punch" to the sound.